Has your child’s teacher been absent? Hold off with a Get Well Soon card

The Secret Teacher: Many colleagues seek roles outside class, with harmful results 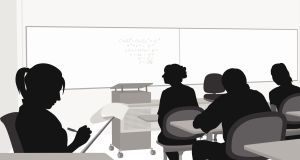 Too often teachers try to spend a lot of time away from the classroom to the pupils’ detriment. Photo: iStock

Miss Shaw is great fun. She’s always up for a day trip or a school tour. She talks to the pupils about her children and the mobile home she spends the whole summer in. The students on these trips see a different side to her: they feel lucky that the school has such a fun-loving teacher to accompany them.

But being present there means Miss Shaw is absent elsewhere, and this is deeply resented by the classes she has left behind, who are not finding the “múinteoir as láthair arís” experience to be educationally enriching.

So, when your child comes home with the news that the teacher was absent, don’t rush to source a “Get Well Soon” card.

Mr Brennan wanted to study law but the points were too high, so he argues his cases in front of his classes instead

While a teacher’s core duties may be carried out in the classroom, many in our profession actively seek time outside it.

They may, for example, (legitimately) volunteer for school trips or training around curricular changes or induction. In any case, it’s a moot point. How many roles outside the classroom can teachers play without inevitably damaging their effectiveness inside the classroom?

Students are challenging enough to organise at the best of times. Add in frequent absences on the part of the teacher and suddenly the pupils not knowing exactly what they are supposed to be doing becomes a real issue, and eventually a problem that is both serious and ongoing.

Mr Brennan only went into teaching because he didn’t get his first choice of course at university. He wanted to study law but the points were too high, so he argues his cases in front of his classes instead.

He is heavily involved in union matters and serves on a committee which meets six to seven times per year.

Far from being unwell when he misses class, Mr Brennan absolutely thrives, and comes back from these committee meetings full of enthusiasm for time spent doing something he really loves.

In recent years much has been made of new initiatives in education, just as junior cycle reform and induction programmes for teachers.

As part of these initiatives, an increasing number of teachers are applying for roles that take them away from their teaching role at school. This could be for a period of years through a secondment or simply for a specific number of days during the school year.

Essentially, they are hired to carry out this other function and granted leave from their teaching job to do so.

In these cases, the teacher may be away from the classroom but still very much working. This makes it hard to complain, and yet both the parents and child develop reasonable fears that the content of the course won’t be covered.

Their absences also lead to many lucrative hours of work for those offering hour-long weekly grinds or similar. Most likely these people themselves have spent the day in the classroom teaching, and their “other role” is that of a grinds teacher.

However worthwhile the time outside the classroom, whether for an adventure or an arduous task, the teaching and learning remain a teacher’s bread and butter.

As non-teachers will never tire of reminding us, we have enviable working conditions. And as aspiring teachers know only too well, ours is a profession in which, when you have made it, you are provided with the blessed trinity of job security, steady salary and decent pension.

There are plenty of teachers in this country still desperately trying to establish themselves in a school where there is some prospect of that. And while the two-tier pay scandal continues, those in the throes of that battle are conscious of striving only for a lesser salary on that lower tier. Those of us lucky enough to have secured full-time work on the higher tier need to ensure that we prove ourselves worthy of it.

When we aren’t there for whatever reason, the result for the students left behind is always the same: “my teacher was absent” or “we had a free class”.

Even when work is left, it becomes a free class when we’re not there to deliver it. Our highly scrutinised school year is considered among the shortest in Europe, and so any additional time lost is hardly going to go unnoticed.

There are clear regulations about how much personal and sick leave a teacher is entitled to, and a need for the approval of school authorities for many of the additional formal roles a teacher takes on.

There isn’t, however, formal legislation governing how often a teacher can be out of the classroom on other school business, and this means that somebody like Miss Shaw can effectively escape as often as she likes.

This isn’t good practice and merits both scrutiny and action. Surely schools could develop internal policies regarding how many days a teacher should spend outside the classroom on “alternative” school business?

This would also be in Miss Shaw’s best interest, as when classes are allocated at the start of a new school year her penchant for regular outings will already be known to the students, and elicit either cheers or moans, depending on the student.

Of course, not all the Miss Shaws care what the students or parents or colleagues think. I know what I think: a teacher’s place is first and foremost in the classroom.