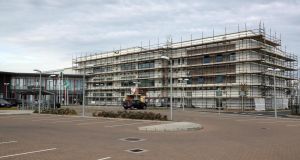 Ardgillan Community College in Balbriggan, Co Dublin, has been forced to find alternative accommodation for some studendents following ‘structural issues’ at its school. Photograph: Collins

Dozens of students have been asked to stay at home this week after part of a north Dublin secondary school was closed as a result of structural problems.

Temporary accommodation is being organised for at least 200 students at Ardgillan Community College in Balbriggan, while about 90 transition year students have been asked to stay at home for most of this week.

In a statement, the school’s patron body, Dublin and Dún Laoghaire Education and Training Board, said structural issues were flagged during a fire safety audit.

It said the walls were opened up in two classrooms on Friday and a consultant engineer discovered “significant structural issues”. Further examination is to be carried out.

The board decided to close the building immediately for health and safety reasons.

“School management is now making immediate arrangements to accommodate up to 200 students who will be discommoded and the school will communicate the details of the arrangements to parents/guardians once finalised,” it said.

A spokesman said students have been asked to turn up for school as normal.

Many transition year students, however, are being asked  to stay at home which will free-up space for the 200 students affected elsewhere in the school. It is hoped a longer-term solution will be found in time for the resumption of school following the mid-term break.

The closure affects phase one of the school building, which was designed and built in 2009 as part of a contract on behalf of the Department of Education. Phase two of the building - completed in 2015 - is unaffected.

Ardgillan Community College - which has 910 pupils - is one of about 25 schools which have been undergoing fire safety audits.  These were triggered following fire safety flaws in five other schools.

All of the schools involved were built by the Co Tyrone-based construction firm, Western Building Systems.

The company said at the time that it did not believe it was responsible for the fire safety issues. It said work carried out by “other contractors subsequent to our handover” may have led to defects or breaches of regulation.

The department, meanwhile, said it was working closely with the patron body in dealing with the issues at Argillan.

Since 2015, Western Building Systems has been awarded contracts to build a Gaelscoil in Firhouse, and “rapid build modular homes” in the Dublin area.

The department said last year that the firm had not been excluded from bidding on other school contracts.

It said a public body has to prove there were “substantive or persistent deficiencies” in a company’s previous work before excluding them from bidding on a State contract.