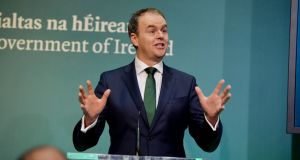 Minister for Education Joe McHugh says he has detected a sense of ‘initiative overload’ among teachers who feel pressurised into implementing a range of new policies. Photo: Alan Betson / The Irish Times

There is a sense of “initiative overload” among teachers who feel pressurised into implementing a range of policies and reforms, according to the new Minister for Education.

Speaking at his first public engagement since taking over the brief from his predecessor Richard Bruton, Joe McHugh – a former teacher – told the Oireachtas education committee that his feedback so far was that many classroom professionals feel under time pressure.

“ They only have a certain amount of time, they are under pressure . . . I’ve referenced ‘initiative overload’. We have to take stock of what Richard Bruton has been working on, and you as a collective committee and the Department [of Education]over the past two and a half years,” he said.

Mr McHugh said he wanted to work on a three-year plan for education, including an examination of “what’s working and not working” and where there are “strengths and weaknesses”.

The Minister was responding to questions in relation to his department’s record on promoting positive mental health in schools.

Mr McHugh said he was also conscious of working to promote the wellbeing of teachers.

“The promotion of wellbeing is an essential element of the ambition of the Department of Education to achieve the best education and training system in Europe by 2026,” he said.

He said an implementation plan for the department’s mental health policy also sets goals to promote the wellbeing of teachers and to address the learning needs of current and future teachers in relation to wellbeing promotion.

Mr McHugh said his department’s action plan commits to increasing the number of psychologists available for schools and the restoration of guidance posts.

Fianna Fáil’s education spokesman Thomas Byrne warned the new minister of “massive resistance” within the department to restoring guidance posts, which were cut in the 2012 budget.

Mr Byrne said it was hypocritical of the department to boast about restoring guidance counselling when his party had forced the Government to restore the posts.

“We had to fight over the course of a number of budgets to make sure it was implemented,” he said.

“There were certain forces work within the Department of Education which did not value guidance counselling. I was told, ‘were these the right people we need to be guiding our children?’. That’s exactly what I was told by one person within the department and I was absolutely shocked at that.”