There are fears over delays to the provision of thousands of places in up to 10 school buildings after building contractor Sammon was placed into examinership. Coláiste Ráithín in Bray is one of those schools. Video: Coláiste Ráithín 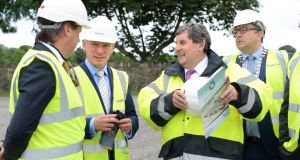 There are fears over delays to the provision of thousands of places in up to 10 school buildings after building contractor Sammon was placed into examinership.

The Department of Education said yesterday evening it was “monitoring the position closely” after the High Court appointed an examiner to the Kildare-based construction group, which employs more than 200 people.

Sammon is involved in the construction of Maynooth Education Campus, the largest school infrastructural project funded by the State, which alone will provide 2,000 secondary school places.

In addition, Sammon was the main sub-contractor to Carillion Construction Ltd, whose collapse last January led to work halting on five schools and a further education institution. They were being built under a major public-private partnership deal but it emerged yesterday that Carillion owes Sammon €8 million.

A re-tendering process to complete them has been underway for a number of months.

A Department of Education spokeswoman said it will “proactively engage with Sammon and the examiner to discuss the impact on any individual projects. Our key focus is on ensuring school building projects are delivered as quickly as possible.”

In the High Court yesterday, Sammon said it was confident that, if an examiner was appointed and a scheme approved, the group would be in a position to complete its contracts on time.

The judge said that, while the firms were insolvent, he was satisfied to appoint an examiner on the basis that an independent expert’s report said it had a reasonable prospect of surviving if certain steps were taken.