Religious schools may be forced to prioritise local children 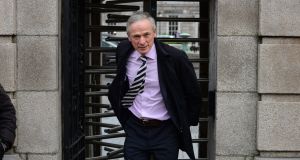 Minister for Education and Skills Richard Bruton has said he wants to introduce changes to the ‘Baptism barrier’ as soon as possible. Photograph: Dara Mac Dónaill

A proposal to oblige religious schools to prioritise locally-based children in their admissions has emerged as a front-runner in plans to limit or remove the “Baptism barrier” from education.

At present, publicly funded schools which are oversubscribed may prioritise children of their own religion ahead of other children who live closer to the school.

This has become a highly contentious issue given that more than 90 per cent of primary schools remain under the patronage of the Catholic Church or other religious organisations.

In response to a consultation process launched by Minister for Education Richard Bruton last January, a catchment-area approach has attracted support from Catholic bodies, Fianna Fáil and Labour.

This proposal would prohibit religious schools from giving preference to children of their own faith who live outside their catchment area ahead of non-religious or minority faith children who live in the locality.

However, the Irish National Teachers’ Organisation and campaign groups such as Equate favour a more radical proposal for an outright prohibition on using religion as a factor in admissions.

Mr Bruton has said he wants to introduce changes to the “Baptism barrier” as soon as possible.

A spokesman for the Minister said decisions around next steps would be taken once all the responses had been examined.

The four options Mr Bruton proposed involved allowing schools to favour children of their own religion only when those children live within the school’s catchment area, or when that school is their nearest one; a quota-based system; and an outright ban on using religion as a factor in admissions.

The Catholic Primary School Management Association, which represents the boards of management of the more than 2,900 Catholic primary schools, said the catchment-area proposal was the “least problematic” of the options.

However, it says reforms to admissions policies will do nothing to alleviate the shortage of school places and only extra school places will remedy this.

Fianna Fáil also supports a selection process based on catchment areas, where children from the catchment area get preferential access.

It says that simply abolishing section seven of the Equal Status Act – which allows schools to discriminate on the basis of religion – would “endanger minority faith schools’ right to their defend their ethos” and “ride roughshod over all of their concerns”.

Labour’s proposal also says a catchment-areas approach might provide the best solution to this issue, adding that it was the first to suggest this in a Bill proposed by its education spokeswoman Joan Burton last year.

It says there may be a role for the Education and Training Boards to co-ordinate the work of drawing up catchment areas, as well as providing a forum for the local community.

By contrast, the INTO says it favours an outright prohibition on using religion as a factor in admissions, as well as the repeal of section seven of the Equal Status Act.

It says schools must be fully supported with clear, realistic and non-discriminatory policy guidelines and procedures.

Similarly, the campaign group Equate also supports such a move on the basis that other options would “continue to allow schools to use religion as a criteria in some form for school admissions”.

Mr Bruton has pledged that changes will be introduced within the lifetime of the Government.