Project Maths: Or is it just Maths?

A greater emphasis needs to be placed on the ability to use algebra, writes Aidan Roantree, Senior Maths teacher at The Institute of Education. 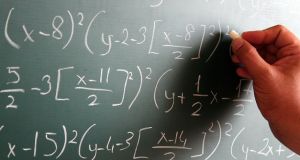 It doesn’t take long for the new and the strange to become the norm. Once the phrase  ‘Project Maths’ was so controversial it spawned many newspaper articles and media discussions, with strong  views being expressed both in favour and against the new maths syllabuses  and exams.

It no longer matters. The old style maths exams have been consigned to ancient history, belonging  to a different generation. But it is certainly time to ask relevant questions about the successes and  failures of the new course and exams.

First of all, one of the aims of the new course was to increase the number of students taking higher  level maths in the Leaving Cert. This has undoubtedly been achieved, although much of the credit  must go to the offer of 25 bonus CAO points for students passing the higher level exam. Nobody  truly believes the increase was in any way motived by an increased affection for the new course.

And the number of students taking higher level is about to rise again.

Because of the reduction to 30 per cent from 40 per cent in the mark required to pass higher level maths from this year on, far more weak  students will persevere with higher level, confident that they will not fail.

However, there are downsides to this increase. First of all, there are many easy question parts on the higher level exam, which allows many weak students who have no real grasp of what is going on to pass the exam. Secondly, the ordinary level maths course and exams have been made significantly easier than before, which means that students who take ordinary level in the Leaving Cert are at a significant disadvantage should there be any maths content in the third level course they will follow.

A positive in favour of the new higher level course is the new emphasis on the application of maths to real life situations, such as the inclusion of financial maths, practical statistical questions and practical problems requiring the use of algebra, trigonometry and calculus. This is reinforced by the  structure of the exams, where fully half the marks are awarded for tackling completely unseen  situations. One of the major problems faced by students when tackling such questions is diagnosing  a correct approach. Doing so successfully requires a good understanding of the  aims and objectives  of the different methods studied on the course.

The stated aim of this change was to reduce the incidence of  ‘rote learning’ and to improve the ͚problem solving skills of students. The pejorative use of the term ‘rote learning’ is to be regretted,  as ‘rote learning’ is required to acquire the basic manipulative skills in order to make progress in more advanced mathematical problems. However, when applied, incorrectly, to the concept of not knowing the exact nature of any question on an exam paper, then it is a positive move because it requires students to have a deeper understanding of the ideas and methods they have learned.

The downside is that students are better prepared to diagnose questions and determine an appropriate approach for solving them, but are not nearly as well prepared as before to execute  their correct diagnosis. In other words, they often understand what they have  to do, but due to  inferior and inadequate skills in basic algebra, they are unable to make any serious progress in  answering the question.

Algebra is the language of maths. The most successful countries in producing students who achieve highly in more advanced assessments of mathematical ability, such as the Maths Olympiads, expend a huge amount of time and effort in making sure that students write coherent and structured algebraic constructions.

And this does not just benefit the elite few. All their students are better prepared to use their maths  skills to successfully complete maths problems, rather than just being able to say what methods to pursue.

The perception that learning how to deal precisely with algebraic expressions, equations and fractions is no more than rote learning because it does not have an immediate real-life appeal is sadly misguided.

As a maths teacher of over thirty years’ experience, my observation of current students is that they recognise that exam questions will not be predictable, as they were in the past. However, their basic manipulative skills are much inferior to those of students of previous generations.

And I am not just talking about the extra 40% of higher level students who, on the previous course, would have taken ordinary level maths. I am talking about all but the select few.

This is being felt in a noticeable way at third level in the many courses that have a maths content.

The inability of students to complete, or indeed to even make serious progress with, maths problems is a major concern. It also results in a large drop-out rate in many courses which require maths, but not at the highest level. Because they attract only the best maths students, third level courses such as maths, theoretical physics and actuarial studies are not suffering as badly as others such as science, computer science and business courses where maths is an essential element of the course.

And there is a huge number of students taking courses like these. A greater emphasis needs to be placed on the ability to use algebra to complete calculations, even if that involves a certain amount of ‘rote learning’.