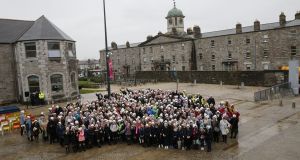 Event on DIT campus, Grangegorman. More than 20,000 students are due to attend the new consolidated campus by 2020. Photograph: Nick Bradshaw

Council planners have sent two major schemes, which would provide housing for almost 1,000 students within a few minutes’ walk of the campus, back to the drawing board, citing concerns over the scale of the developments and their effect on the surrounding residential area.

The council has also asked the developers to justify providing more student housing in the area rather than “standard residential accommodation”.

The larger of the two schemes proposes the demolition of the Park Shopping Centre on Prussia Street, which backs onto the west side campus, and its replacement with 541 student bed spaces along with new shopping facilities.

The council has raised “serious concerns regarding the overall height, scale and massing” of the six-storey development and has sought a reduction in height and a redesign of the building.

Planners also queried the effect the development might have on the National Transport Authority’s plans for a BRT (bus rapid transit) line from Blanchardstown to UCD.

Immediately to the east of the campus, a development of 440 student bed spaces on a site formerly owned by the Christian Brothers, between the North Circular Road and Rathdown Road, must also be redesigned, the council said.

It has raised particular concerns about the impact of the proposal on nearby Great Western Square, an architectural conservation area, given the “monolithic nature” of parts of the proposed development.

The council has also sought evidence that the housing would be used by students at a recognised third-level institution or higher education institute.

“In this regard the applicant is requested to submit evidence of links with these institutions or expressions of interest in the facility.”

In relation to both schemes the council said it was concerned they would contribute to an “overconcentration of student accommodation” in the general northwest inner city area.

Park Shopping Centre Limited, and Ziggurat, developers of the North Circular Road site, have six months to respond to the council.

More than 20,000 full- and part-time students are due to attend the new consolidated DIT campus on the site of the former St Brendan’s Hospital by 2020.

Apartment blocks for almost 8,000 students are planned or under way in the north inner city, with more than half of those within 500 metres of the campus.

Local residents fear the area will become overwhelmed by students, who would account for 60 per cent of the population in the Grangegorman area if all proposed schemes secure planning permission.

The DIT said it has has not given any direct endorsement or commitment to any off-campus student project. It plans to build accommodation for about 2,000 students on campus.