ASTI may opt to reballot at central executive meeting 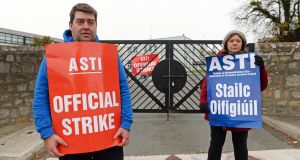 ASTI picket at Monkstown Park College in Dublin last year: thousands of ASTI members have lost out on incremental pay rises, and a €800 payment for supervision and substitution duties. Photograph: Eric Luke

The Association of Secondary Teachers, Ireland (ASTI) is to hold a special meeting of its 180-member central executive next week amid speculation it may seek to reballot teachers on proposals to end its long-running dispute with Government.

The union narrowly rejected a set of “final” settlement proposals earlier this year by 52.5 per cent to 47.5 per cent.

The proposals followed industrial action which closed hundreds of secondary schools over three days in October and November.

The agenda for the meeting on April 1st lists a “review of current industrial disputes”, along with house-keeping matters such as the adopting of standing orders.

However, union sources say a number of executive members are keen to reballot members amid concern among teachers who are losing out on access to permanent contracts and pay increments due to the dispute.

A recent meeting of the ASTI’s standing committee heard concerns the 18,000-strong union was losing a steady stream of members as a result, say sources. Some executive members are hoping to “split” the ballot in two, with separate questions over pay and conditions, and reform of the junior cycle.

The thinking is that while teachers may agree to work additional hours in return for pay restoration and access to permanent contracts, they may opt to continue to resist junior cycle reforms.

Settlement proposals drawn up before Christmas by an arbitration body sought to deal with various issues such as pay, junior cycle reform and the overall Lansdowne Road public service agreement.

However, the union has been warned by the Department that it is an “all or nothing” proposal and cannot be split into separate questions.

The meeting takes place as a small number of ASTI members face the threat of potential redundancy. Up to now, teachers who have become surplus to requirements have been redeployed to other schools in need of teaching staff.

However, the Government withdrew this protection for ASTI members following its rejection of settlement proposals.

About 60 secondary schools have received letters notifying them of their surplus staff, though the number of teachers affected is likely to be smaller.

The union has warned that it will immediately ballot teachers on industrial action if the Government moves to make any of its members redundant.

The last meeting of the union’s standing committee in early March heard concerns over members leaving the union in recent months which had run into the hundreds, according to a number of sources.

The union’s honorary national organiser provided details of the loss of membership, while a discussion was held on how to address the issue.

The union’s vote to cease working additional “Croke Park” hours last autumn prompted the Government to trigger a series of penalties under financial emergency legislation, as the ASTI was judged to have “repudiated” the Lansdowne Road pay agreement.

As a result, thousands of ASTI members have lost out on incremental pay rises, as well as a €800 payment for supervision and substitution duties.

In addition, union members are set to forfeit a €1,000 pay increase due to other public servants in April.

One of the biggest issues causing concern within the union is reduced access to permanent contracts – or contracts of indefinite duration – for newer members.

While teachers had access to a permanent contract after two years under the Lansdowne Road pay deal, this has been extended to four years outside the agreement. While settlement proposals were drawn up last December aimed at ending the dispute, the union’s central executive committee recommended a “no” vote on the basis it did not go far enough to restore pay for new entrants.