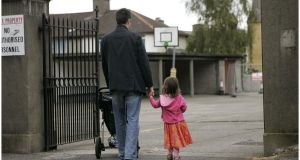 Schools would still be able to prioritise members of their own faith if they live within the catchment area. Photograph: Dara Mac Dónaill

It may look like an easy solution to the Baptism barrier on the face of it . However, the use of catchment areas to help level the playing pitch for all students could well bog down school admissions in a bureaucratic quagmire.

Publicly funded schools are legally permitted to discriminate against students in their admission policies based on their religion.

In a system where 95 per cent of schools are run by a religious patron – mostly Catholic bodies – this means non-religious or minority faith children can be denied access to their local school and parents are left struggling to find them a place.

Key players, such as Catholic bodies, Fianna Fáil and Labour, have thrown their weight behind proposals to ensure that schools would prioritise children in their admission policies from within their own catchment areas.

If implemented, it would mean religious schools could not discriminate in favour of a member of their own faith from outside its catchment area above a locally based non-religious child.

Schools, however, would still be able to prioritise members of their own faith if they live within the catchment area. Many Catholic schools have been operating catchment areas – typically based on parish boundaries – on an informal basis for years without any major problems.

However, if these proposals are made into law, it will oblige religious primary schools to have catchment areas underpinned by cold, hard legislation.

So, against this legal backdrop, who will ensure no one draws up artificially large catchment areas, allowing schools to fill all their places with children of the same religion?

Who will adjudicate on the cases where a family claims they reside within a catchment area but are deemed outside it? What appeals mechanism will there be when a family still isn’t satisfied with decisions made?

Using parish boundaries wouldn’t necessarily make the challenge any cleaner or easier. What, for example, happens if a parish school lies at the edge of the parish boundary and has a long tradition of children attending the school? And what about schools run by religious orders which are not traditionally part of the parish?

This, inevitably, could lead to a bureaucratic super-structure to police these issues.

From the Department of Education’s point of view, it could clearly like to outsource these nettlesome issues to the churches.

Its consultation document suggests these issues could be adjudicated on by the relevant church or religious authorities, who would have to create either nationally or regionally a process to mediate or adjudicate disputes in relation to borders between schools in question.

A Church of Ireland Ireland school, for example, could serve a much larger area. As for the two existing Muslim schools in Dublin, they may potentially have to divide effectively the greater Dublin area between them.

It all sounds complicated for what should be a simple issue.