How I got my A1 in English

Ciara Georgina Walker, past pupil of The Institute of Education is currently studying Veterinary Medicine in UCD 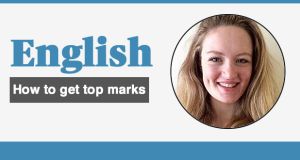 I’ve always loved English, but in terms of exams, it made me nervous. The fact that it isn’t objective, like maths or the sciences, leaves a lot of room for interpretation when it comes to grading. Despite this, I was counting on English to be one of the subjects I counted in my Leaving Certificate, so I couldn’t let it slip by the wayside.

I think the single, most important thing I’ve learnt when writing is to be concise. I never seemed to write as much as everybody else in essays, and while that initially worried me, I came to realise that shorter, to-the-point essays were probably much appreciated by the people marking them! It isn’t always easy to be succinct, of course, especially if the essay topic is one which you don’t feel particularly strongly about. Remember, though, that in the exam you always have a choice. This is not the case in class, so if your teacher sets an essay that leaves you at a loss, don’t worry about it. That particular essay just isn’t for you.

Speaking of choices, my next piece of advice is to practice all sorts of essays. I found that a good way to do this is to compile a list of all composition essay titles from past papers, and get someone to randomly choose one for you to write. Try and do at least one a week, and don’t avoid the types of essay you don’t like – I had a real problem with speeches, but by writing several throughout the year, I would have been comfortable enough to tackle one if none of the other titles took my fancy in the exam.

Now, while writing essay after essay is very useful for Paper One, I found that my best tool for Paper Two was to read the set works until I knew them inside out and back to front. I started by familiarising myself with the plots and poems, then wrote notes in the margins and made links within and between works. For poetry, I learnt off the shorter poems so that I had a larger repertoire of quotes. Make sure you learn enough poets to have at least one, but preferably two on the day of the exam – it’s all very well adoring one poet but if they come up with a very obscure question, you might want to answer on somebody else. When it comes to Shakespeare, I found that translating the text into modern English was a really good way of understanding it – there is no denying that his works can be very tough to master!

No matter what comes up on the exam, make sure that you have prepared yourself as far as possible beforehand. Read through the paper with a highlighter in hand and pick out important words in the questions. Choose the ones which you have an opinion on, and remember that you do not have agree, especially if you are asked to discuss a statement. If you think that the author or director in question does a poor job of exploring a certain issue, you can say so as long as you can back up your argument.