Playing with the curriclum: What should your children learn and how?

Play based learning is just one of the major changes planned for primary schools; how effective is it? 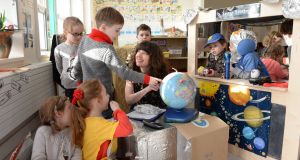 These children are playing at being tiny astronauts. Some of the little spacers are currently examining moon rocks and noting down aliens that they have observed from their space station. Others are undertaking perilous space walks to fix a satellite. Of course, astronauts need to eat, so part of the space crew are busy fixing dinner - not always easy in a no-gravity situation.

Every day, Sorcha Brennan, a junior infants teacher at Glasnevin Educate Together, devotes a full hour of class time to play.

“At the moment, we’re exploring and learning space, but next month it could be a totally different topic,” she says.

“I’ve seen that play is a great way to get children to learn at their own pace while still being challenged and engaged. We’ve moved away from workbooks and we’re really building up the skills and capacities of the children.

“Parents are sending in books relevant to the theme - the children are particularly fascinated by the story of astronaut Chris Hadfield - and they’re learning to read and write through instructions on how to brush your teeth in space.”

Brennan’s experience, and that of hundreds of teachers around the country, forms a huge body of evidence to support a move towards play-based learning.

Since 2009, teachers and childminders who work with children aged from zero to six have been using the Aistear curriculum, a framework for learning that centres around key themes: wellbeing, identity and belonging, communicating, and exploring and thinking.

It is well-regarded internationally and is seen as more effective than foisting up to 11 distinct subjects on children aged four to six (indeed, it could be seen as a “sneaky” way of serving up subjects like maths, Irish, reading, science, art and music to children without them even knowing that they’re learning). Many parents use aspects of the Aistear curriculum at home.

Now, with a major reform of the primary curriculum planned - the largest in two decades - play-based learning looks set to be rolled out into the early years of primary school.

Meanwhile, up to 40 per cent of the day may be designated as “flexible time” with the remaining 60 per cent given over to the State curriculum.

“Children learn so much more when they’re enjoying it, when it is self-directed, and when they have autonomy over what they are doing,” says Brennan.

“We’ve found that we’ve moved to be more playful throughout the day; even in subjects like maths, we have maths songs and activities. This isn’t completely free-form and a lot of planning goes into it, although it it’s a much more effective way of linking different subjects together and it places autonomy back in the hands of the teacher.”

It’s a small school of just 60 children and three mainstream teachers. She’s been using play as a teaching method since 2009.

“It is planned by the teacher but it’s open-ended and child-led,” she explains. “I give it an hour a day. In my class, we have a ‘socio-dramatic corner’ which allows for sensory and language learning and role play. When the 1916 celebrations were in full flow, we had a post office and the children role-played different scenarios.

“During the last election in 2016, the children knew that the school was a voting centre, so we had our own elections, voting on favourite play areas, fairy tales and book characters.”

During one school self-evaluation which focuses on oral language development, the school principal, Caroline Madigan, saw first-hand how children in Hanley’s class were excelling.

From this, the entire staff have looked to roll out aspects of play-based learning to middle and senior classes, right up to sixth class. Each term, the whole school picks out a topic - it could be space, 1916, or spring - and explores it from different angles, encompassing numeracy, literacy, science, history, physical education, music, art and more.

“For the older classes, there’s less emphasis on the hour of play, although they do occasionally visit my classroom and use the socio-dramatic corner,” says Hanley. “And we are seeing more playfulness for all ages throughout the school day with more games, role-play and drama. Even us adults play.”

What happens next? “I’ve seen the links between pre-school and primary school, and now I think we need to see more of a flow between the curriculum in primary and that in second-level” says Hanley.

“We’re presenting children with opportunities for play and discovery learning, then shoving them back to didactic teaching methods in secondary school, and then expect them to become reflective learners in third-level. I think these linkages will become more important.”

How do we make sure our children’s learning is fit-for-purpose for the 21st century?

Children born today will begin their working lives in the fifth decade of this century and will retire in the late 2080s.

They will spend eight years at primary, more years than in any other stage of their education.

Recent years have seen calls for computer coding, modern language, education about ethics and religion, as well as more emphasis on online safety and age-appropriate education about healthy relationships and sexuality.

Changing the curriculum is not as straightforward as it may seem, however. Ireland has a particularly consultative approach to education, especially when it comes to the curriculum, but there are only so many hours in the school day.

Since 2016, the NCCA has been leading a conversation on the primary curriculum which involves teachers, parents, principals, boards of management, academics and, crucially, the children themselves.

A major conference was held to look at the issues last year, while last month the council issued a report based on their consultation.

How change happens is yet to be decided. Arlene Forster, deputy chief executive of the NCCA and a former primary school teacher, says the structure of the primary school day, as well as how time is allocated, will be decided by ongoing consultation and research.

“What was relevant to children in 1999 may not be as relevant today,” she says. “But we need to reconcile these demands and calls and be practical about what a primary curriculum can do.”

Broadly, the NCCA consultation process saw general agreement that “flexible time” was a good idea, although there was some concern that some subjects or areas - such as patron’s programmes - may “lose out” in a review of how time is allocated.

The review also looked at how the curriculum could be structured, with much support emerging for a single curriculum stage encompassing the two preschool years and two infant classes.

Other options, include a three-stage model which would gradually introduce primary children to formal subjects over the course of their eight years, are also being considered.

The details have to be ironed out: some respondents expressed concern about the practical challenges for small schools, and there’s a debate to be had about the role subjects should hold in the curriculum.

Every member of the public is invited to have their say. For more information, see ncca.ie