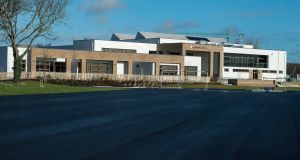 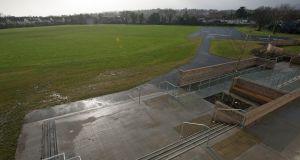 Playing fields at Clonkeen College which are slated to be partly sold off for development. Photograph: Dave Meehan

Minister of State for Higher Education Mary Mitchell O’Connor has voiced her support for the Clonkeen College board of management in its dispute with the school patron over the sale of sports playing fields.

Speaking to a packed parents association public meeting on Monday night, Ms Mitchell O’Connor said she would work “tirelessly” to ensure the board of management and school community got a fair hearing at Government level and to protect the interests of current and future pupils at the south Dublin boy’s school.

However, she failed to confirm whether Minister for Education Richard Bruton would reject the proposed dissolution of the school’s board of management.

Ms Mitchell O’Connor told the hundreds of parents, students and local community supporters that she was not the “voice of the department” or “a proxy for Richard Bruton” at the meeting but that she had heard the “pain, distrust and complaints” of the school community.

The Edmund Rice Schools Trust (ERST) moved last week to dissolve the board of management at the Deansgrange school over “serious concerns that the functions of the BoM are not being effectively discharged”. The call for dissolution comes amid an ongoing dispute between the school and its founders, the Christian Brothers, over the planned sale of 7.5 acres of playing fields for a reported €18 million.

The ERST, a lay organisation, manages 100 former Christian Brothers* schools across the State. The school has taken legal proceedings against the congregation, disputing its right to sell the land. The case is due to go to trial in March and, until it is resolved, the sale cannot complete.

Still time to come support us to try and prevent the dissolution of our BOM by ERST. TDs @mitchelloconnor @MariaBaileyFG & @RBoydBarrett in attendance along with reps of parents, staff & students. pic.twitter.com/HeJWxbBg1A

Describing the situation as a “complex” and “unique” issue, Ms Mitchell O’Connor said the Attorney General had been consulted and would advise Mr Bruton on the “duties of the different stakeholders”.

Also speaking at Monday’s meeting, People Before Profit’s Richard Boyd Barrett described the ERST’s call to dissolve the board as “an outrageous act of bullying and retaliation which should be rejected out of hand by the Minister”.

Mr Boyd Barrett, a TD for Dún Laoghaire, said the work of the school’s board had been “exemplary in its defence of facilities” and that its actions were “purely motivated by the best interests of the students and the school community.

“ERST and the Christian Brothers have been reckless in abdicating their responsibilities to protect and enhance the facilities and resources of the school,” he said.

Mark Brophy, chairman of the schools’ student council, said it fully supported the board of management and that pupils were “shocked and outraged” by ERST’s tactics.

“As students we can see the contribution made by the board of management on a daily basis, the school wouldn’t be here today without their dedicated management. These people are simply volunteers who out of their own goodwill give huge time, energy and expertise in a school that students take pride in.”

Speaking on behalf of the staff, Jim Byrne said every teacher in the school supported the board’s position and t they “unequivocally” opposed “any decision which compromises our cherished school environment”.

Mr Byrne also questioned ERST’s decision not to inform the school board and members of staff of plan to sell the land “for a year” and its show of support for the Christian Brothers in the dispute.

Chairwoman of the school’s parents association Susan MacKenzie - who organised Monday’s meeting - urged Mr Bruton to reject the dissolution of the board. She also expressed her dismay at “what appears to be a deliberate act to frustrate the activities of the board of management to maintain the playing fields here.

“It is scandalous that a voluntary board has been pushed to these lengths,” she said. “Dissolution will have a negative and destabilising effect on the boys. It diverts attention away from the students who need to focus on their study.”