State to double education funding for world’s most vulnerable 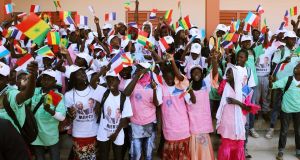 Children wave flags during the inauguration of the Bel-Air secondary school in Dakar, Senegal, at the same time as a conference organised by the Global Partnership for Education. Photograph: Ludovic Marin/AFP/Getty Images

The State is to double its financial commitment to an organisation providing education for some of the world’s most vulnerable children.

The Department of Foreign Affairs has announced its intention to contribute €25 million over three years to the Global Partnership for Education (GPE), which is dedicated to delivering education to some of the most marginalised and vulnerable people in the world’s poorest countries.

The State’s commitment to the fund is to rise from €4 million to €8 million per year.

Minister of State for International Development Ciarán Cannon, who attended the event, said the State was at the vanguard of countries prioritising the education of children in conflict situations, an area which is an increasing focus for the GPE.

“Ireland believes that quality education is a fundamental right,” Mr Cannon said. “The education of girls, in particular, has far-reaching effects on family health [and] nutrition and empowers girls to prioritise the education of their children.”

About 130 million girls worldwide are unable to attend school, according to a new analysis from the charity ONE, which has welcomed the State’s increased contribution.

It says the lack of a decent education results in 2,800 avoidable deaths in the poorest countries every day, which is a global emergency that demands an urgent international response.

ONE co-founder Jamie Drummond said the State’s commitment “harks back to a great Irish tradition of spreading education in the poorest regions of our world – but also promises to modernise this legacy for the challenges of the 21st-century”.

“As a country that recognises the value of education it is encouraging to see the Irish Government making a commitment to education in the developing world. I hope other countries will take their lead and increase their pledge to education,” he said.