With one teacher for every 100 students, the challenge is to retain children in education 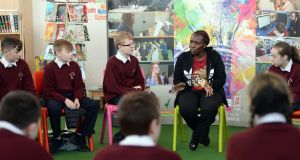 One teacher for every 100 students. That’s the reality for Mary Goretti, a secondary school teacher from Uganda who works in a refugee camp.

But that’s the least of her challenges: the children arrive, often orphaned and traumatised from war, from neighbouring countries including Eritrea, Rwanda, South Sudan and the Congo.

Lessons at Nakivale Secondary School are in English but few, if any of the children, speak the language. And persuading children to go to school in the first place isn’t always easy.

Goretti is in Ireland this week after winning a high-profile national competition to find Uganda’s best teachers.

The competition, run since 2008 by Trócaire, the Irish Embassy in Uganda and the country’s biggest daily newspaper, aimed to reward teachers who go above and beyond the call of duty in a country where the basics, including materials and salaries, aren’t always there.

Teachers from all over Uganda entered and this year, for the first time, five of them won a trip to Ireland to share and exchange information about our education systems.

The Ugandan teachers were keen to see examples of best practice in Irish literacy and numeracy education, and to look at how, despite challenges, the Irish education system manages to retain more than 90 per cent of students up to Leaving Cert level.

This week, they paid a visit to Trinity Comprehensive, a disadvantaged (Deis) secondary school in Ballymun, Dublin. The school has its own full-time librarian and all students have the chance to take part in art, music and drama.

“In Ireland, the education system makes learning very real and practical, rather than teaching on theory,” Goretti said.

“They use methods that make the children think for themselves and this something I want to focus on when I return to Uganda.

“The pupil-teacher ratio in our school makes that hard, although we hope to get it down to one teacher for every 50 pupils.”

Since arriving in Ireland last week, the teachers have met a range of education figures, including Minister for Education Richard Bruton and a number of primary and post-primary schools around Dublin.

While Uganda has faced international condemnation for its persecution of LGBT people, the UN High Commissioner for Refugees, Filippo Grandi, has praised the country for its “model treatment” of refugees.

Uganda receives more than 500 refugees per day and now provides sanctuary to around 1.4 million people.

When refugee children arrive in Goretti’s class, they may have little or no experience of formal education. Getting them engaged early on is crucial.

“I look at the needs of the children. We have to meet them where they are at, even though we don’t have a lot of resources. We have to be imaginative. The UNHCR [the United Nations’ refugee agency] can’t support all the children and, even if they could, we need to retain them in school.

“One way we do this is through a banana plantation where they can develop vocational and work skills; another is through a poultry project.

“We’ve also ensured they can get certification for skills such as tailoring and hairdressing, and we worked hard to get an exam centre so they can sit their tests in the district.”

The school in Nakivale opened its doors to 187 children in 2010.

“Now, we’ve over 1,600 children enrolled, including more than 700 girls, which is a big achievement.

“But as we grow, class sizes swell, so we’ve had to be very creative in how we manage and control the class.”

Uganda is seen as a critical partner in Irish Aid’s ambition to support global education efforts.

In 2017, the Government provided €4.5 million to education in Uganda through Irish Aid. Ireland’s programme focuses on better access and completion of quality education and training in Uganda’s Karamoja region, one of the most remote and poorest parts of the country.

Ireland is a founder, and the 12th largest donor to the Global Partnership for Education, contributing €4 million a year since 2002.

Later this week Minister of State for Foreign Affairs Ciaran Cannon, who is on a visit to Senegal, is expected to announce a significant increase in Ireland’s support to global education efforts.