Minister says gap is being bridged with new teachers out of college earning €36,000 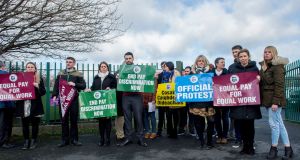 Teacher shortages will worsen unless pay equality for new entrants is accelerated, according to the Teachers’ Union of Ireland.

The union, which held a series of lunchtime protests on Thursday over the issue, said lower pay scales were now threatening the quality of the education system.

“The range of subjects affected will inevitably have broadened further by next September unless the only guaranteed remedy – a restoration of pay equality – is implemented,” she said.

“It is wrong-headed and disingenuous for the Department [of Education] to suggest that these shortages are mere ‘pinch points’ across some subject areas.”

She said applications for postgraduate teaching courses for second level have “collapsed” by 62 per cent since 2011, while a survey of its members found that 29 per cent of recent entrants did not see themselves in the profession in 10 years’ time.

“The real reason behind this crisis is abundantly clear. Those teachers and lecturers who entered the system since 2011 are paid at a lower rate than their colleagues for carrying out the same work, and graduates who might formerly have chosen teaching are now choosing other employment options,” she said.

However, Minister for Education Richard Bruton said 75 per cent of the gap in pay scales between new entrants and those hired prior to 2011 was being bridged under pay increases.

“As a result of these changes, the current starting salary of a new teacher is €35,958 and, from 1st October 2020, will be €37,692. This is a very competitive graduate salary, as the CSO reports today have confirmed,” he told the Dáil on Thursday.

Mr Bruton said his department has successfully hired more than 5,000 extra teachers in the last two years. “We are hiring more teachers than at any other point in the State’s history,” he said.

He also insisted there was no problem with overall teachers supply and said the number of students graduating as teachers is stable.

“There has been no fall in the number of graduates and what has happened is that we have dramatically increased the level of recruitment,” he said.

However, he said the numbers graduating had not fallen and that undergraduate teaching programme were “ massively”oversubscribed.

Mr Bruton is also examining a number of other moves aimed at easing “pinch points”’ in teacher supply for key subjects.

They include quotas for particular subject areas where there is a shortage of teachers, such as science, maths, French and German.

Last week he announced that school managers should only authorise career breaks in cases where a replacement is available. He has also suspended restrictions which prevent those on career breaks from working.

In a response to a parliamentary question by Joan Burton TD on Thursday, he has also announced that he will ask the Teaching Council to review subject criteria and processes for assessing out-of-State qualifications for teachers.

In addition, he has asked the council to engage more with graduate fairs and final year students.