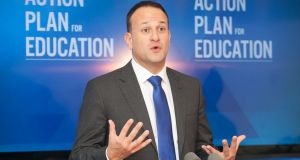 More students will be encouraged to learn foreign languages and study abroad under a plan to build closer links with Europe following Brexit.

The Government’s action plan for education acknowledges that Ireland needs to prepare for a changed dynamic in the EU following the UK’s departure and the rising importance of non-English speaking countries globally.

Speaking at the launch of the 2018 action plan, Taoiseach Leo Varadkar said it was a shame that “most people in Ireland can only master one language”.

“It’s so different when you go to other countries, such as Germany or Netherlands, where people can very commonly speak two or three languages. I think we’re really losing out in that regard,” he said.

“One of my big regrets is that I didn’t take that opportunity to study in Paris, Berlin, Madrid or Barcelona . . . One of the few upsides of Brexit is that British universities will not be part of Erasmus anymore, meaning that more Irish students studying in Manchester or Birmingham will hopefully take the opportunity to study in continental Europe.”

He acknowledged concerns over an acute shortage of teachers at second level in European languages, in particular, and insisted plans were under way to boost supply in these areas.

Mr Varadkar was speaking at the launch of the Government’s action plan which sets out more than 300 actions aimed at making our education and training system the best in Europe within a decade.

Of the hundreds of actions planned over the coming year, he said three “really stuck out for me” which he hoped to see enhanced.

Along with work on foreign languages, he said plans for a school excellence fund and the introduction of physical education on to the Leaving Cert curriculum were key priorities.

The excellence fund supports schools to undertake innovative projects in areas such as digital learning and boosting student performance in disadvantaged schools.

Mr Varadkar said much of our education was very standardised and centrally controlled, but the fund would support schools to try different approaches to meeting their local needs.

“We want to encourage schools to do things differently; to try things that are new and different. We want to fund that, see what works and potentially mainstream it.”

Other key aims of this year’s action plan include an update of the Deis programme for disadvantaged schools, with a target to narrow the gap with non-Deis schools in areas including standards of literacy and numeracy.

It also pledges to enact the Technological Universities Bill, with the first TUs to open in September 2018, along with a review of the quality of teaching across higher education generally.

There will also be a fresh focus on wellbeing, with support of the junior cycle programme on the topic and the recruitment of ten more psychologists to a support system for schools.

In special education, it plans for the first-ever, in-school speech-and-language therapy service, along with a comprehensive assessment of the special needs assistants’ scheme to ensure we are achieving the best outcomes for children.

Minister for Education Richard Bruton said the Government’s commitment to education was clear with the budget for the sector growing by €1 billion in the past two years.

“We are hiring more teachers and investing more to support learners with special education needs than ever before,” he said.

“We are seeing higher retention rates, exceptional outcomes in literacy and numeracy and better results in ensuring opportunities for those who come to education at a disadvantage.

“All of these investments and results show that we are on a journey to becoming the best education and training service in Europe.”