One in five baptised child just to gain entry to school 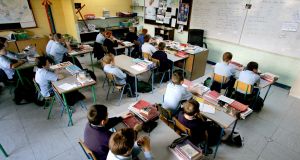 The survey found that 48 per cent of parents said location was their main factor in deciding on a school, compared with 12 per cent who said the school’s ethos. Photograph: David Sleator

A large majority of parents feel the law should be changed so that baptism can no longer be a requirement for school admission in State funded schools, according to a new opinion poll.

The survey, commissioned by the campaign group Equate, was based on a national poll of 400 randomly selected parents of school-going children.

While 72 per cent agree the “baptism barrier” should be dropped, the same poll found that 24 per cent would not have baptised their child if they did not need it to gain entry to school.

The findings come as the Government consults with education partners on a number of proposals which would either limit or remove the baptism barrier from admission to schools.

Some 96 per cent of primary schools are under religious patronage and they are legally entitled to discriminate in favour of children on the basis of religion in their admission policies.

While up to 20 per cent of schools over-subscribed, the extent to which children are denied places on the basis of religion is hotly debated.

Last week, the Catholic Primary Schools Management Association said its figures showed only 1.2 per cent of enrolments in greater Dublin were refused because of the baptism barrier.

Michael Barron, director of Equate – which is campaigning for greater equality in Irish education – said the research shed new light on what parents really think about issues such as school admissions and patronage.

“Our intention is to allow parents to voice their own opinions and in so doing to inform and contribute to this ongoing dialogue,” he said.

“Key results from this research identify a measure of dissatisfaction on behalf of parents with the system as it is currently maintained.”

The poll also found that a large majority (71 per cent) agree that a subject about all religions and ethics in our schools should be introduced by the National Council on Curriculum and Assessment.

An overwhelming majority (87 per cent) feel the needs of our children should be more important than the needs of school management when decisions are being made in our schools.

Mr Barron said the 400 parents who responded to the survey were randomly selected in an online poll conducted by Research Now.

Quotas were set on gender, age, social class and region to correctly reflect the known demographics of parents in the Republic. The full survey is available at the Equate’s website (www.equateireland.ie).

“We wanted to give them an opportunity to consider the debate about the role of religion in our schools and what this means for them as parents and for their child’s education.”