Disadvantaged school statuses to be reassessed 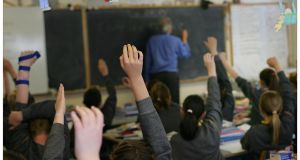 Schools will find out next year if they still meet the criteria for disadvantaged supports under a new approach to funding schools in deprived areas.

Minister for Education Richard Bruton formally launched a new programme on Monday which he says will result in additional support for almost 80 additional disadvantaged schools.

These schools have been identified using a new affluence and deprivation model, which allows policy-makers to identify localised pockets of deprivation in a more accurate way.

However, the new model is likely to reveal that some schools no longer meet the criteria for disadvantaged status due to factors such as population changes or better outcomes for pupils.

Speaking to reporters on Monday afternoon, Mr Bruton said special “transition” arrangements will apply to any schools which exit the programme. The process of identifying these schools will begin next year.

“If we find that over time that a school outside the programme has a much higher level of disadvantage than one that is in it, it does raise the question for policy-makers of whether this is a fair way of using resources,” Mr Bruton said.

“So, we will have to look in the future at transition arrangements: how you can see schools evolve in and out and progress beyond.”

At present, more than 800 schools in the Deis (delivering equality of opportunity in schools) scheme benefit from reduced class sizes and extra grant-aid.

Research shows the scheme has helped boost the academic performance of students and curb the numbers dropping out of school early.

The new plans will see the number of schools added to the Deis scheme expand by 80, while a further 30 schools will receive a higher level of support than they currently do.

The full list of schools to benefit is due to be announced shortly.

The plan sets new targets for improving literacy and numeracy, school completion rates and progression to further and higher education.

Mr Bruton said the new approach will allow for more tailored supports depending on schools’ needs, as well as a greater emphasis on collaboration with other schools on sharing best practice.

Fianna Fáil’s education spokesman Thomas Byrne welcomed the new plans, but said schools who do not meet the qualifying criteria should have an opportunity to make their case to the Department.

He also expressed concern at what he said were delays recruiting additional educational psychologists for schools.

While the Government’s action plan for education envisaged recruiting 65 educational psychologists during the first quarter of 2017, he said had been reduced to 10.

“The delay in making these appointments is disappointing considering it’s well acknowledged that we urgently need to hire additional educational psychologists to assist students with special needs,” he said.

“No explanation has been given as to why the recruitment process has been delayed.”

The Department of Education has not yet responded to media queries on these appointments.

Mr Bruton, meanwhile, said there will also be book rental schemes for all participating schools in the new Deis scheme, as well as pilot projects aimed at encouraging “innovation and creativity” in schools.

Many of these initiatives will be provided through a new “school excellence fund”.

“We have to support our teachers and schools leaders, through up-skilling, mentoring and coaching, so they can plan, deploy and to support,” Mr Bruton said.

“Our plan develops best practice so that schools can be identified for extra support in a fair and objective manner. We will pilot new approaches to encourage innovation and better outcomes for children. This can be mainstreamed over time.”