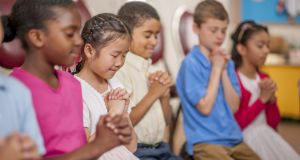 policymakers say the area of learning will be incorporated into the wider primary school curriculum. File photograph: Getty Images

Plans to introduce a new subject on world religions and ethics in primary schools have been watered down in the face of concerns it could challenge the ethos of denominational schools.

Instead, policymakers say the area of learning will be incorporated into the wider primary school curriculum rather than as a separate subject.

The change is likely to be seen as a victory for religious groups and Catholic bishops who are opposed to the subject on the basis it could undermine faith-based education and swamp an overloaded school curriculum.

Plans for education about religions, beliefs and ethics – known as “ERB and ethics”– at primary level emerged from the report of the Forum on Patronage and Pluralism in 2012.

It recommended that the National Council for Curriculum and Assessment (NCCA) draw up plans for teaching in this area to ensure children have a wider understanding of the major forms of religion, belief traditions and world views.

A consultation process around the proposed subject between November 2015 and March 2016 attracted a record number of responses.

There was support from many quarters on the basis that it was a positive step towards fostering greater understanding and respect in an increasingly diverse society.

However, significant numbers of submissions from religious groups – especially from Catholic bishops – were hostile to the idea on the grounds of time constraints, curriculum overload and clashes with patrons’ programmes.

For example, the Catholic Primary School Managers’ Association – which supports more than 2,800 primary schools – warned that the proposed curriculum would undermine the ethos of their schools and cause a rise in the number of Catholic parents opting out of the new subject.

A consultation report on the proposals, published on Monday by the National Council for Curriculum and Assessment (NCCA), describes a different way forward by integrating teaching and learning about the proposed subject into the wider curriculum.

This could include elements of it included in SPHE (Social Personal and Health Education), SESE (Social Environmental and Scientific Education) or a new aspect of a revised primary curriculum known as “identity and belonging”.

The consultation report also notes that legislation underpinning our education system is limiting what is achievable through a State curriculum on world religions and ethics.

The Education Act (1998) protect the rights of faith-based schools – which represent about 96 per cent of all primary schools – to teach programmes in accordance with their own ethos.

This means that any school can refuse to teach aspects of a new curriculum or subject if it clashes with its ethos.

The NCCA’s report says these sections of the Education Act are “potential barriers” to the type of “objective, critical and pluralist” approaches advocated in the proposals for a curriculum in education about world religions and ethics.

“The debate, relating to the tension between what the State describes as appropriate learning for children and the reality of what transacts in classrooms across school types, is ongoing,” the report notes.

The report states that work on developing teaching and learning about world religions and ethics will be considered as part of wider reforms to the entire primary school curriculum.

A consultation process taking place over the coming months on these issues will allow the NCCA identify and specify how aspects of teaching about world religions and ethics could be incorporated into the curriculum.

On Tuesday, the Catholic Primary School Managers’ Association said it would continue to engage in dialogue with the NCCA in an “open and positive manner” in the interest of all the children attending our schools.