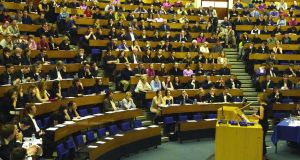 Chairing the debate will be Minister Katherine Zappone, civil rights advocate and the current Minister for Children and Youth Affairs.

This year’s line-up for The Irish Times Debate final was finalised on Saturday, 21st January in the Council Chambers of University College Cork.

There was success on the double for the hosts with the college’s "Philosoph" team of Ross O’Donoghue and Ciarán Daly winning the team place in the final where they will be joined by individual speaker Lewis Shanahan from the UCC Law Society.

The motion for the fourth and last of the semi-finals was: “This House believes the Left has failed.”

Teams from the Dublin University Phil, UCD Law Society, UCD L+H, as well as the winners and individuals from the UCD Medical Society, the Trinity Hist, NUIG Lit and Deb and UCC Law contested the remaining places in the final.

The winning team argued for the proposition that the Left had failed in power both here and abroad - Mr O’Donoghue saying that it “was less interested in effecting meaningful change than talking about it” and Mr Daly pointing out that left-leaning political societies had a history as far back as the Weimar Republic and up to the Obama presidency of provoking backlashes.

“Never underestimate how quickly change can come,” he said.

Mr Shanahan, opposing, argued that “because of the long-term stability of collectivist society…. the vision of the left had not failed,” even if the interests of the many is at times undermined by the self-interest of the few.

The other motions debated in the semi-finals were: ‘This House Believes Feminism has let down young men,’ ‘This House supports squatting unoccupied private property,’ ‘This House would choose to live in its own echo chamber,’

This year’s final, the 58th, will take place for the first time in Dublin Institute of Technology, Bolton Street on Friday 17th February. Although this is the first hosting of the final by DIT, Bolton Street took the individual award in 1971 when broadcaster Marian Finucane became the first woman to win the Irish Times Debate.

The motion before the house will be: “This House Believes the women of Ireland should strike to repeal the eighth amendment”.

Minister for Children and Youth Affairs Katherine Zappone will chair the debate.

The order paper was drawn after the semi-final.