Schools could lose out in plan to fight disadvantage 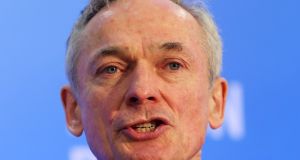 Minister for Education Richard Bruton will announce plans on Monday to expand the number of schools in the Deis scheme by 80. Photograph: Colin Keegan/Collins Dublin

Some schools in disadvantaged areas which benefit from extra supports could end up losing out under a new approach aimed at more accurately identifying the most deprived schools in the State.

At present, about 800 schools in disadvantaged areas benefit from reduced class sizes and extra grant aid.

Minister for Education Richard Bruton will announce plans on Monday to expand the number of schools in the Deis (delivering equality of opportunity in schools) scheme by 80.

These schools have been identified using a new model which allows policymakers to identify localised pockets of deprivation in a more accurate and objective way.

The Deis 2017 plan acknowledges that the new model may reveal that some schools not in the scheme have a level of disadvantage much higher than those in the scheme.

“If this turns out to be the case, then we must consider whether it is fair that those schools continue receiving these additional resources, using resources that may be more fairly allocated to the schools with greater levels of disadvantage,” the plan states.

A spokesman for Mr Bruton said no schools currently in the Deis programme will be “immediately affected” in terms of the phasing out of supports.

Mr Bruton will announce plans on Monday to add about 80 new schools to the scheme, while a further 30 schools will receive a higher level of support than they currently do.

The current Deis scheme costs almost €100 million a year. The new plan will cost about €15 million extra in a full year, though about €5 million will be spent this year as the changes will come into force from September this year.

The full list of schools to benefit is due to be announced early this week.

Speaking ahead of the formal announcement, Mr Bruton said every child should have the opportunity to fulfil their potential, regardless of their circumstances and that education has a unique capacity to break down the cycles of disadvantage.

The plan sets new targets for improving literacy and numeracy, school completion rates and progression to further and higher education.

In all, the plan identifies more than 100 actions in support of tackling educational disadvantage. Those actions include:

* Book rental schemes for all schools participating in the school support programme by September 2017;

* A series of pilot schemes aimed at encouraging “innovation and creativity” in schools, and the development of these initiatives through a new “school excellence fund”;

* Giving all secondary schools in the scheme access to a dedicated career guidance counsellor;

* Improving the transition for children from pre-schools to primary schools in communities;

* Schools will set “specific, measurable, achievable, realistic and time specific targets”, including targets for literacy and numeracy, teacher-training and leadership;

* Appointment of an additional 10 psychologists to improve supports to Deis schools;

At present there are two bands of support available to schools. The plan states that work will be carried out to consider designing a more tailored system with more grades of disadvantage identified, and resources allocated accordingly in response to the needs of individual schools.

The review will be carried out at the end of the 2017/2018 academic year to examine how the new model of allocating resources has operated.

The aim will be that, following this work, in 2018 the new model of resource allocation will be finalised.