Ministers optimistic Leaving Cert exams will go ahead this year 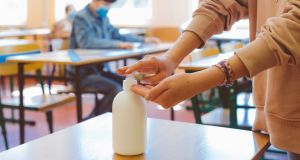 Officials will meet on Wednesday to discuss contingency plans for the Leaving Cert but Ministers are optimistic that the exams will go ahead this year.

The Cabinet on Tuesday discussed a phased plan to reopen schools which would see classes for children with special educational needs resume first. It is understood that primary school pupils and exam year students would return next. The issue is to be discussed further by Ministers next week.

Tánaiste Leo Varadkar said a continued steady reduction in Covid-19 case numbers would lead to the return of classes.

“At the moment the number of cases is falling by around 7 or 8 per cent a day. It is halving roughly every 10 days. So if we are at around 1,000 now, it is reasonable to project that in 10 days’ time, if we all keep doing what we are doing, we could be down to around 500-600 cases a day and in 20 days half that again. That is optimistic, but it is our current trajectory,” he said.

He said such a decline in infections would “allow the prospect for a safe reopening of schools on a phased basis across February and March”. The Government would prefer a phased reopening because of the added risk posed by the widely circulating Covid-19 variants, Mr Varadkar added.

Talks between Department of Education and unions on schools reopening are continuing. A department spokesman declined to comment on the status of the talks except to say it was the department’s ambition to reopen schools safely as soon as possible.

Taoiseach Micheál Martin at the weekend said schools would not fully reopen in advance of St Patrick’s Day, indicating that it could be closer to Easter before all students are back in the classroom.

Second-level teachers’ union and student representatives are due to resume talks on alternative options to the Leaving Cert exams today.

The Irish Second Level Students’ Union said it would emphasise the need for students to be given a choice between calculated grades or sitting a “slimmed down” version of the Leaving Cert.

Michael Gillespie, general secretary of the Teachers Union of Ireland (TUI), said this week that while the hope remains that the exams can proceed normally, there was also the possibility of some kind of modified Leaving Cert reflecting time lost in physical attendance.