Q&A: How many people are travelling into and out of Ireland? 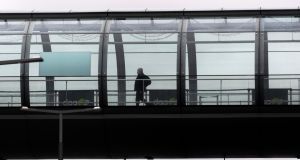 According to the latest figures from the Department of Transport, 14,772 passengers arrived at Dublin Airport last week. Photograph: Colin Keegan/Collins Dublin

The Cabinet has signed off on a range of measures designed to curtail travel into the State as well as extending the current Level 5 lockdown until March 5th. The introduction of mandatory quarantine in dedicated facilities for those arriving from South Africa and Brazil, as well as those without PCR tests, has also been approved.

We examine just how many people are entering and leaving the State every day.

Do we know how many people are arriving into Ireland and departing at the moment?

Last week, 15,105 people arrived into Dublin, Cork and Shannon airports, according to the latest figures from the Department of Transport, with the capital’s airport accounting for 14,772 of those passengers.

The previous week, January 11th-17th, there were 18,226 arrivals across the three airports. Between January 4th-10th, there were 33,808 arrivals, with Dublin Airport accounting for 32,700 of those. The department said these figures included passengers in transit.

DAA, which operates Dublin and Cork airports, said an average of 6,800 passengers were arriving and departing daily, and that figure would usually be 80,000 passengers at this time of year.

The department did not provide figures for those travelling via ferry, but the latest figures from the CSO show an average of about 3,000 people arrived by sea per week in November.

How many flights are currently operating daily?

There are about 100 flights per day arriving into and departing from Dublin Airport, which would normally be 600-650 flights daily during January.

DAA said the number of people on each flight was “significantly lower than would be the case normally”.

Cork Airport currently has two flights per day to and from London with an average of 180 passengers arriving and departing.

Did all arrivals provide a negative PCR test taken within 72 hours of departure, since it was made mandatory from January 16th?

No. Separate figures from the Department of Justice show that between January 16th-24th, there were 110 breaches of the PCR test rule at Dublin Airport with an additional 30 breaches across all other airports and ports.

Were these breaches largely people failing to provide a negative test result?

The department said the breaches were a mixture of people failing to provide a test result and others providing a test result that was taken within 96 hours of arrival, rather than 72 hours.

Do we have any idea where arrivals into Ireland are coming from?

DAA said Amsterdam is the top location for both arrivals and departures. “Last week, we had an average of 2,000 arriving passengers per day, which was a 94 per cent decline, so passenger numbers have been falling,” a DAA spokeswoman said.

The CSO’s air and sea travel statistics for last November (when the country was also in a Level 5 lockdown), show that of the 103,900 people who entered Ireland that month, 38,800 came from Britain, 12,000 from Spain and 8,600 from the Netherlands.

The figures also showed that the majority of people arrived by air (87.6 per cent) compared to by sea (12.4 per cent). The CSO’s figures for December will be published this Friday.

How do arrivals into Ireland compare with this time last year?

The Department of Transport have said arrivals into Dublin Airport last week are down 93 per cent on the same time last year, while the number of passengers coming into both Cork and Shannon airports are down 99 per cent over the same period.