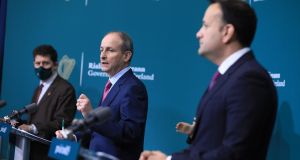 Taoiseach Micheál Martin has said the State needs to “keep pressure up on the virus” after the Government announced the extension of Level 5 Covid-19 restrictions until March 5th.

The Government has said despite a dramatic fall in new Covid-19 cases there could still be between 800 and 1,300 people in hospitals at the end of February and up to 100 patients in intensive care units.

Mr Martin said while numbers are decreasing, the real pressure points will remain hospital admissions and ICU cases, for another month at least. “That is why we have to keep pressure up on the virus and reduce it.”

He added: “The message to people for the next six weeks is very simple: Stay at home. Do not travel. Do not make any journeys outside of your 5km unless you absolutely have to. Hold firm and stick to the basics.”

He was speaking at a press conference following Tuesday’s Cabinet meeting, where a raft of new measures were approved to clamp down on non-essential travel in and out of the State, including across the Border to Northern Ireland. There are also new fines for those travelling outside the 5km zone around their home with no good reason. The current fine is €100, but it will increase to €500 for those who have flagrantly breached the rule.

Tánaiste Leo Varadkar said it was innately unfair that a person who ventured 1km outside the limit was fined a similar amount to somebody who travelled abroad on a ski holiday.

He also indicated schools could begin opening on a phased basis during February and March, starting with special schools.

He said it was reasonable to assume that the numbers of new cases of Covid-19 would be down to between 500 and 600 in 10 days’ time, and half that again in 20 days. By that stage, numbers would be much lower than when schools were open.

He added, however, that the approach to reopening schools would need to be “cautious because of the new UK variant”. It would also need to be gradual.

Mr Varadkar said he could not give an estimated date for when the hospitality sector would reopen.

New rules include criminal sanctions and compulsory quarantine for incoming travellers who fail to produce a PCR negative test, a temporary suspension until March 5th of holiday visas for visitors from South Africa and South America, and all travellers from South Africa and Brazil to go into hotel quarantine for 14 days. Mr Varadkar said the quarantine locations would probably be hotels situated close to the airport.

Minister for Transport Eamon Ryan said travellers from the UK and elsewhere who arrive into the State via Northern Ireland would be subject to the same legislation, sanctions and rules as those arriving directly into the State. He said negotiations for sharing data and protocols were ongoing with authorities in Northern Ireland, including shared passenger locator forms.

Mr Ryan also said new laws would be explored to make people resident in the North subject to similar fines as residents of the South.

It was accepted that several of the new measures would require primary legislation which could take a number of weeks to prepare.

Minister for Health Stephen Donnelly said the vaccination programme has hit all targets to date, with 140,000 vaccinations delivered as of last weekend. He said a further 51,000 would be delivered this week.

“I am not happy with the news from AstraZeneca saying they will give less to Ireland and to other EU member states,” he said.

Mr Donnelly confirmed the policy for now was to vaccinate those who have already had Covid-19. He said the National Public Health Emergency Team was examining whether past infections conferred sufficient immunity, but that work had not yet been completed.