Efforts to tackle abuse during lockdown set to be ‘locked into’ policy, says senior garda 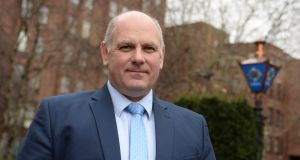 The “overwhelming” majority of domestic violence involves males targeting females but many men are also being victimised and violence within same-sex relationships is coming to the attention of gardaí, a senior detective has said.

Det Chief Supt Declan Daly, of the Garda National Protection Services Bureau, said that although Operation Faoiseamh was put in place to tackle rising domestic violence during the pandemic, it had ushered in a new era that would endure beyond Covid-19.

He said increased efforts to reach out to victims and tackle domestic abuse would be “locked into Garda policy going forward”.

The pandemic, he said, was especially difficult for victims as they were forced to spend more time at home with their abusers during a time when violent offenders may be more easily “triggered”by pubs being closed, drugs being harder to access or children being out of school.

“When you look at those situations, if you add an abuser into that family situation it ramps up the danger and the fearfulness for victims,” Det Chief Supt Daly said.

Inside Business with Ciaran Hancock · Retail rent pressure / Ulster Bank: will it stay or will it go?
Coronavirus Data Dashboard

“The overwhelming number of complaints come from women; it’s violence by men on women. But there are also many cases when men have come forward and they have been physically assaulted or have been victims of coercive control. They are dealt with in exactly the same way. It’s the same for gay or lesbian relationships, and we get violence within those relationships too of course. We will investigate them all in the same way.”

Det Chief Supt Daly said Garda management decided early in the pandemic to take a hard line with abusers who breach court orders – barring, safety and protection orders – by arresting them and bringing them before the courts, which could be “a very sobering experience, or a sharp message to them”.

As a result of the increased effort to tackle such offenders, more than 4,000 criminal charges were pursued last year against people for breaching domestic abuse court orders, up 25 per cent on 2019.

In total, 7,600 criminal charges were brought against suspects for a range of domestic violence crimes last year, an increase of 24 per cent.

While those figures were for all of last year, most of the rise was recorded after April 1st, when Operation Faoiseamh began to respond to increased concern about domestic violence during the first lockdown.

Daniel Kane (52) last week became the third person convicted of coercive control, which became a specific criminal offence in 2019. Det Chief Supt Daly said the 10½-year sentence imposed on Kane for violently controlling his ex-partner also signalled a new phase in how gardaí and the courts were dealing with domestic abuse.

He said “the conversation” around the issue was changing and offenders should know they faced a much tougher response. Those who did not feel ready to make a formal statement of complaint and begin a criminal process against their abuser could come to the Garda or support services for help in planning an exit from their situation.

He added that once initial contact was established, it was very clear that victims felt they had “encouragement and reassurance”.

“They have pathways to help so they can say to themselves: ‘I need to report this.’ ”