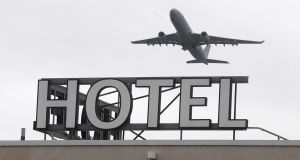 A plane flies over a hotel near Heathrow Airport near London, Britain. Hoteliers in Ireland have response to a proposed mandatory hotel quarantine for some arrivals. File photograph: Neil Hall/EPA

Hoteliers predict proposed mandatory quarantine requirements for some people arriving into the State will be a significant “deterrent” on overseas travel, with numbers confined to hotel rooms under such a regime likely to be low.

Pat McCann, chief executive of Dalata Hotel Group, which includes the Clayton and Maldron chains, said he had had “limited conversations” with Government officials over the use of hotel rooms to quarantine people coming into the State.

Mr McCann said hotels would be “very geared up” to operate as quarantine facilities for arrivals into the State.

Mandatory quarantine in designated hotels is to be put in place for passengers who arrive into the Republic without a valid negative Covid-19 PCR test prior to their travel. All travellers arriving in from South Africa and Brazil will also have to go into hotel quarantine for 14 days.

Speaking on Tuesday, Tánaiste Leo Varadkar said it would be a number of weeks before the quarantine requirements would come into force, as legal and logistical issues had to be ironed out.

Mr McCann said that at present occupation levels in hotels were “only a fraction of where it was” before the Covid-19 pandemic. A number of Dalata hotels were currently accommodating frontline healthcare or other essential workers, who were unable to stay in their own homes while working, he said.

Hotels were far from “bursting at the seams”, and there would be 850 rooms between the two Clayton and Maldron hotels near Dublin Airport, he said.

The prominent hotelier said there was unlikely to be “a huge influx” of people coming into the country, including people returning from trips abroad, who were required to quarantine in hotels.

“It will be a deterrent . . . People thinking about going abroad will reconsider if they have to quarantine,” he said.

In a hotel quarantine scenario people would be confined to their rooms, with meals dropped up to them each day in disposable containers, he said. They would put their sheets and towels in special bags for staff to wash, to avoid any cross-contamination, he added.

Similar strict quarantine regimes have long been in place in countries like Australia and New Zealand.

“It’s a fairly long time to be confined. Compliance with this has to be 100 per cent, we have to keep our staff safe,” Mr McCann said.

From speaking to hoteliers in countries with mandatory quarantine regimes, Mr McCann said incidents of people breaching the rules were rare.

He said he did not envisage hotels having to hire large numbers of additional security staff to police the measures.

Michael Lennon, owner of Westport Woods Hotel, in Co Mayo, said hotel staff would have “concerns” over the heightened risk of Covid-19 involved in a quarantine scenario.

However, staff did already have some training in how to deal with confirmed cases, as part of guidelines brought in ahead of the reopening of the sector last summer, he said.

Measures like CCTV cameras in hotel hallways would be one option to ensure people adhered to the quarantine rules, he said.

Mr Lennon said most hotels would welcome any additional income following a bruising year for the tourism industry. “It’s better to have somebody in a room than nobody,” he said.