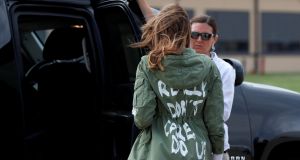 US first lady Melania Trump walks from her to her motorcade wearing a Zara design jacket with the phrase “I Really Don’t Care. Do U?”. Photograph: Kevin Lamarque/Reuters

Jacket chaos: Who was the intended audience for Melania Trump’s ‘don’t care’ coat?: The First Lady often seems to use her clothes as a private diary, this time it backfired. Vanessa Friedman reports.

Violence. Sex. Drugs. Swearing. And other reasons to watch a film. Donald Clarke argues that what we object to at the cinema has changed and that it is about time that movie ratings should change too.

Seven tips to improve your memory: Getting a good night’s sleep, positive thinking and having a good social life are some ways to keep your powers of recall at their peak. Nic Fleming reports.

Dolores O’Riordan’s children given $250,000 ‘Zombie’ cover proceeds: American heavy metal band Bad Wolves have handed over a cheque for $250,000 (€216,000) to the children of Dolores O’Riordan and hope to raise $1,000,000 for them. The Cranberries singer was due to sing the vocal on the band’s version of Zombie before she was found dead in a London hotel room on January 15th this year. Ronan McGreevy reports.

The Student Digestive: Deborah Ryan’s Broccoli, feta and cherry tomato salad - A handy number for street parties and other occasions.