The Student Digestive: A handy number for street parties and other occasions 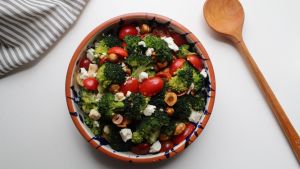 I went to a street party last week, as a third wheel to my sister and her boyfriend, Simon, who lives on the road. The street had a very neighbourly feel in the days before, with people calling over to each other’s houses to plan it and jokingly shouting from door to door, asking what each family was making. Instructions were given for each house to bring a dish for the occasion.

I often get a phone call around dinnertime from Simon, asking what I’m up to. We both know I’m making dinner and that he’s five minutes away. It was decided that in exchange for drinks, I’d ghost-cook the food for Simon’s contribution, which he would pass off as his own.

While they went out to get the beers for the party, I collected the ingredients and made this salad in my flat. I packed it into two plastic containers and cycled over to meet them on their way back with a lovely bag of cans. As usual, we were fashionably late to the street party, as per student pre-drink guidelines, assuming arriving later was the status quo. Though once we had arrived, everyone was up and socializing, having already eaten. This is suburbia of course, everything runs on time.

Still hungry and stood awkwardly with our bag of cans, we quietly retreated to an empty table and ate half of the salad that was meant to be shared amongst neighbours. Later, we would find out that instead of offering the second container to others, Simon had hidden the remaining container of salad in his fridge to munch on at the end of the night.

Toast the hazelnuts in the oven for 10-15 minutes on a baking tray, until golden and the skins flake off easily. Leave to cool for a few minutes before rubbing the skins off with a towel or else just use your fingers. You’ll find it’s a very satisfying process. Alternatively, you can just leave the hazelnuts out, if it’s too much effort

Cut the broccoli into small pieces and halve the cherry tomatoes. Add to a mixing bowl with the hazelnuts. Crumble in the feta in pea-sized chunks.

Shake the rest of the ingredients together in a jar, or else whisk with a fork in a small bowl, adding a pinch of salt and pepper.

Drizzle the dressing over the salad and mix together well. This will keep in the fridge for two days.