Gaelcholáistí overrepresented in the Feeder School listings across almost all rankings 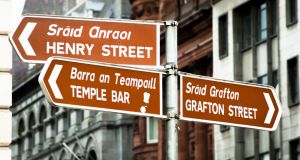 Studies show that students in bilingual education settings outperform other children when it comes to comprehension and other social-linguistic and cognitive control skills.

Irish medium schools continue to outperform many of their peer schools with a higher rate of students progressing to higher level education than most other sectors, the latest Feeder School figures show.

While Irish-medium schools where all students are taught exclusively in the Irish language number just 48 of the 715 schools registered with the Department of Education for the school year 2017-18, they continue to be overrepresented in the Feeder School listings across almost all rankings.

This year, for example, two of the three non-fee paying schools listed in the top 20 list of schools with the greatest progression to high points courses are Irish-medium schools.

Of the 26 schools listed on the top mixed feeder table, eight (30 per cent) are Irish medium schools. The percentage increases to 46 per cent when you strip out the eight private English medium schools that feature on the list.

On the list of top non-fee paying schools, seven Irish medium or bilingual schools feature in the top 25 secondary schools.

So why are Irish-medium schools seemingly overrepresented in the Feeder School figures?

The proportion of Irish-medium schools that consistently rank prominently at the upper end of the tables has become a distinctive feature of the annually published schools data set.

The benefits of bilingual education are well-documented and there is evidence that parents are increasingly choosing this option for their children.

The advantages extend beyond the ability to speak two languages and studies show that students in bilingual education settings outperform other children when it comes to comprehension and other social-linguistic and cognitive control skills.

In a 2011 study published by the University of Limerick bilingual students in second and third level with high ability in Irish and English outperformed their monolingual peers in mathematics, even when assessed through English - their second language of learning.

Some commentators suggest the success of Irish medium education is attributable to a middle class orientation they say pervades in the sector. While some Irish medium schools are of course located in middle class areas,  the performance of Irish medium and bilingual schools in other socio-economic areas are also often above average.

Despite its success, the Irish medium sector is facing considerable challenges including a shortage of teachers and an inability to meet the high demand for places. The number of pupils attending Irish-medium primary schools in 2018 exceeds 44,000 children while secondary schools that teach exclusively in Irish can only accommodate just under 13,000 students.

Some steps have been taken by government to address these issues and others have been promised.

Earlier this year, up to 60 new places on new Irish-medium teacher-training courses were announced to address shortages in schools in both Gaeltacht and non-Gaeltacht areas. The Department of Education has also promised to revise how the school patronage process operates “to give additional regard to parental preference for Irish-medium education.”

However, The Irish Times reported last month that An Foras Pátrúnachta, the largest patron body of Irish-medium schools, is considering legal action against the Department of Education over the claim it has failed to implement a patronage process that would be in line with State policy on extending of bilingualism in Irish society.