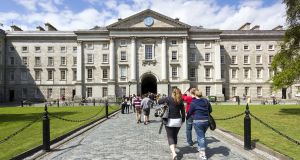 The proportion of school leavers heading to college is now edging towards 60 per cent. Photograph: iStock

The Irish Times Feeder School data published on Tuesday provides details of the educational pathways of thousands of students across almost 700 secondary schools this year.

We can see the patterns of where students went on to third level and in what numbers.

They do not show where students went on to further education or apprenticeships; we have consistently requested this data but education authorities have not yet released it.

Notwithstanding that, this year’s figures provide some striking insights into areas such as the importance of social class and geography in determining the paths of many thousands of pupils. Here are some of the key points from this year’s data:

The data reveals the ongoing good news story of Ireland’s exceptionally high third-level participation rates, putting us among the highest in the world for those under 40 years of age.

The proportion of school leavers heading to college is now edging towards 60 per cent.

By contrast, the equivalent proportion in countries such as Germany is less than half this figure.

Ireland also continues to have one of the highest retention rates in second level across Europe: that is the proportion of students who stay in school until the Leaving Cert.

Within the feeder school figures are stark differences in college participation based on social class.

By contrast, more deprived areas of the city such as Dublin 17 has a progression rate of just 7 per cent (though this may be distorted by a single secondary school in the area). Dublin 10 and and Dublin 11 also had relatively low progression rates of 42-44 per cent.

The divide is also stark when the figures are broken down into higher points courses, which are defined as programmes in universities, colleges of education, the Royal College of Surgeons in Ireland (RCSI) or the Dublin Institute of Technology (DIT).

3. Most students are staying local

Irish young people are tending to apply for third-level places in their local colleges.

This is partly cultural as most Irish school leavers want to attend colleges where they can continue to socialise with their peer group.

But there is a growing economic factor too: living away from home adds hugely to the cost of attending college. This is especially true for students considering Dublin, Cork or Galway for college given the accommodation crisis.

A breakdown of figures on a county basis also show there are lower progression rates in counties which do not have a large third-level institution on their doorstep.

In Longford, for example, 61 per cent of school leavers went to college; in Galway – home to NUI Galway and GMIT – the equivalent figure was 84 per cent.

4. Affluence, rather than private schools, is a key factor

Most of the schools where all students progress to third level are fee paying, but the fees are not the determinate factor.

Non-fee-paying schools in the same geographic areas draw their pupils from the same social class and achieve similar participation rates.

5. Some Deis schools performing well Schools which are designated as disadvantaged – or Deis – receive extra resources. Overall, about 57 per cent of pupils in these colleges go on to higher education.These rates have not shifted much since 2012, according to our figures.

When we break down the figures to see who are the “most improved” schools over recent years, however, a great deal of schools are in the Deis category.

For example, Scoil Chuimsitheach Chiaráin, a co-educational Deis school in Connemara, has seen its third-level participation rate increase from 60 per cent in 2012, to 97 per cent in 2018.

These figures can, however, be distorted sometimes by falling student numbers, or pupils leaving school early, which push progression rates – temporarily – upwards.

This shows the scale of challenge for both the schools involved and the Government.