Seven steps to choosing the right school for your child 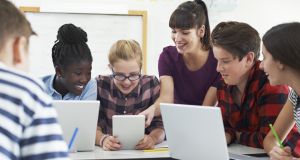 A growing number of parents want to make sure their child is going to a school that reflects their religious or secular values. Photograph: iStock

How can you choose the right school for your child? This year’s Irish Times feeder-school tables – which show the proportion of students who progress to third-level – provide one piece of the puzzle for some parents.

But experts say those who look only at academic performance when choosing a secondary school for their child should consider a much broader array of indicators,

If a child has additional learning needs, parents need to know the school has the resources to cater for them.

A growing number want to make sure their child is going to a school that reflects their religious or secular values.

Some will want to know whether LGBTI young people are fully embraced and included, rather than merely tolerated. Extracurricular options, including the sports on offer, will be central for others.

Different parents will place different emphasis on different factors, and it’s unlikely a school will tick all a parent’s boxes, so deciding what matters most – and prioritising – is important.

Of course, there are large swathes of the country where there’s no real choice, with young people either attending the local school or travelling long distances every day.

Barry O’Callaghan, a consultant to the National Association of Principals and Deputy Principals and a leading educational thinker, says the single most important factor in choosing a school is whether it fosters curiosity.

‘If I was opening my own school, the banner would say: ‘Building Curious Minds’.

“Can they see curiosity, independent learning, creativity, collaboration, questioning, confidence-building and critical thinking? If we’d had more critical thinking 30 years ago, we may not have had the Church scandals or the economic collapse. Our traditional model of active teacher in a passive classroom is changing.”

So, what do parents need to watch out for?

The Irish Times feeder-school lists show the proportion of pupils who have gone from that school to third-level.

For some parents keen to maximise their child’s chances of going to university, this may be a very valid indicator. It is only part of the picture, however.

“They don’t show us how many drop out once they get there,” says O’Callaghan. “You’ll see schools on this list where students got 600 points but if they don’t go to college with an investigative and creative mind, it won’t suit.

“Yes, I want my child to get maximum points, but I also want her to be happy, balanced, articulate and courageous.”

O’Callaghan says a strong emphasis on learning and teaching is vitally important in the best schools.

“Look at the school’s literature and the notices on their walls. In the best schools, the word ‘learning’ appears more than the word ‘teaching’. Do they talk about ‘learners’ instead of ‘kids’?

“In the school, are the walls full of finished works, or is the emphasis on works in progress? A school that really gets it places more emphasis on questions than on answers.

“Look out for an emphasis on perseverance, relevance and brilliance and, in particular, an emphasis on effort. Technology can be useful, but pedagogy [methods and practices of teaching] should come first. Ask if they have a policy for learning.”

Should a school impart religious values? This is a choice for individual parents to make, ideally in consultation with their child. In the majority of cases, there’s at least some religious control on the board of management, even if a school may initially appear to be secular. It’s generally a little easier to opt young people out of religious instruction at second-level.

Whether or not a school is Catholic may not tell a parent anything about their attitude to sex and relationships. All schools will wax lyrical about the value of inclusiveness and diversity, but does the school actively focus on safe internet use, consent and healthy relationships?

“Innovative schools are not afraid of parents and won’t leave them at the school gate,” says O’Callaghan. “And they’re not afraid of their students. Ask to see the student charter and the process when a student has a complaint. Does it show that students are entitled to have their voice heard and will they be listened to? Is there a genuine learner voice in the school or merely a tokenistic student council where they’re not really considered?”

O’Callaghan praises schools where students can address teachers by their first name. “It gets away from the militaristic ‘Sir’ and ‘Miss’. The genuflections and elevations are gone, and there’s nothing to hide behind. The teachers get 10 times more respect.”

In this context, O’Callaghan adds it’s also important to see whether a school is actively promoting democracy and the importance of tackling climate change. “Yes, results are important, but in a world of rising autocracy and strongmen, it’s important that a school imparts the value of liberal democracy. And if the world falls apart because of climate change, there will be nothing to go to school for. Schools might trumpet how they have a green flag but, ideally, climate change is integrated into the curriculum across the board.”

Extracurricular activities are an essential part of a student’s learning experience – especially if the child is less academically oriented. “If you have a child who is a little bit different, this is a big consideration,” says O’Callaghan. “If your child is in need of more pastoral care and support, that also needs to be factored in. Also worth asking: do they have a relaxation or meditation room? Is mindfulness practised in the school? And do they have access to counselling and supports beyond career guidance?”

Is the school fee paying or non-fee paying? Fee-paying absolutely does not imply ‘better’, because there’s plenty of research to show that what really matters is the education level of the parents – especially the mother. It all comes back to the values of the school: do they encourage the young people to close ranks and form an ‘old’s boy network’, with merely the occasional sop to charity? Or are they genuinely outward-facing? Are they hierarchal and patriarchal, where parents still have to address teachers as ‘Mr’ or ‘Miss’, or are they more progressive and forward-thinking? A fee-paying school might have high college progression rates, but it counts for little if they’re behind the curve on teaching and learning.

“Ireland has a relatively high number of single-sex schools, especially in south Dublin. The research on the relative academic merits of single-sex and co-educational schools is mixed, but there is evidence that a mixed school is a better social preparation, particularly in this era of #MeToo and consent. If boys and girls are foreign to each other until the late teens, how can they really have mutual understanding and respect?” says O’Callaghan.

6. How the school is run

Consider school size, subject choice, whether or not a school streams the students, and discipline.

A smaller school with smaller classes might seem ideal, but do bear in mind that this might mean they offer less subject choice. Ideally, a school will offer physics, chemistry and biology as well as home economics and technical subjects, but not all have the facilities.

While students may be separated based on whether they’re taking an honours or pass paper in a particular subject, streaming by ability is a backwards practice. It lumps together young people who may, for various reasons, be struggling academically, tells them they’re not bright, discourages hard work, and ensures the most disruptive students are placed together. The evidence is very clear that young people tend to disengage from education if their peers aren’t paying attention either.

Where can you get the information you need? It’s really important to go beyond these feeder tables. Attend open days. Look at whole-school evaluations, which are available on the Department of Education website. Parents rely on local word of mouth because, although there will always be some unsubstantiated rumours flying around, the grapevine is generally quite reliable. School websites are increasingly useful: if they’ve got a good website with plenty of transparency and information, it’s a good sign – although, if they don’t, this may be simply an indicator that they simply haven’t got around to it, perhaps because of limited resources. Finally, ask questions of the principal and teachers: if they clam up and close down, this isn’t the best sign.

The parent view: What matters to you when choosing a school?

– Subject choice, sports facilities, university feeder [ie how many students from that school go to college according to The Irish Times feeder school list] proximity to home, feedback from friends, track record in terms of dealing with bullying, fees. I think I’ll end up selling my soul and sending the eldest to the school where her pals are off to. Torn! – Nicola Hogan, @xhogan

– For me it was non-fee paying, co-educational and not Catholic. Living in Churchtown, Dublin 14, that narrowed the choice down considerably – Sandra Velthuis, @SandraVelthuis

– Location, ethos, subject choice and where I believe they can achieve their full potential. I have four kids with very different needs but they will all go to the same non-fee paying schools thanks to a sibling policy. I have two in secondary and two in primary. One child is dyslexic and I believe they will have good supports and subject choices when they start in 2021 – Liz Dillon, @DillonLiz

– Four sons, three on the autism spectrum. Student welfare and support is paramount. The eldest three are in a local ETB school and extremely happy with it – Mairead Quinn, @doogarry

– Decent extra-curricular and co-curricular activities. Less bullying because of a half-decent policy being implemented. Diversity in the school including gender, ethnicity and religion. I’m very much influenced now by smartphone policy. A good transition year programme. Not [concerned with] Leaving Cert results – Dolores Errity, @ErrityDol