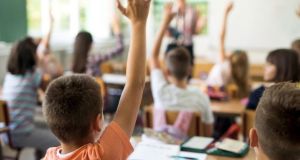 A review of teacher education reforms commissioned by the Higher Education Authority notes that primary teaching applicants were drawn from the top 12.5 per cent of Leaving Cert students in 2011. Photograph: iStock

The academic calibre of trainee teachers has dipped at a time of controversy over two-tier pay rates and falling numbers of applications to the profession, according to an unpublished report.

A review of teacher education reforms commissioned by the Higher Education Authority notes that primary teaching applicants were drawn from the top 12.5 per cent of Leaving Cert students in 2009.

The Irish Times understands that a report by international education expert Pasi Sahlberg notes that the academic calibre of applicants has since reduced to the top 20 per cent of Leaving Cert students.

This still, however, puts the academic standard of Irish teaching applicants in the same league as some of the best in the world.

The report notes that the volume of applications to post-graduate teacher education programmes – formerly know as the Hdip – has fallen by about a third since they were turned into more expensive two-year courses a few years ago.

It adds that reductions in starting salaries for new entrants to the profession – introduced in 2011 – may have also contributed somewhat to reduced interest in teacher education courses.

Since the report was compiled in recent months, a draft pay deal has since been put to teacher unions which promises to narrow further the pay gap between new entrants and longer-serving teachers, but stops short of full pay equality.

The report on teacher education reforms by Mr Sahlberg is generally positive on the progress made since an international panel proposed a series of sweeping reforms in 2012.

The panel proposed that 19 State-funded providers of teacher education be consolidated into six university-led centres of excellence by 2030.

The bulk of these proposals – such as the merger of St Patrick’s College in Drumcondra and the Mater Dei Institute of Education into DCU – have already occurred.

One of the most controversial proposals was to consolidate Trinity College Dublin and UCD’s teacher education programmes into a single centre.

The report notes that discussions over recent years did not advance the proposal.

Having visited the respective campuses, this latest report says full integration is not now considered necessary.

Trinity has forged closer links with Marino Institute of Education over recent years, while UCD has done the same with the National College of Art and Design.

Similarly, it adds that the the creation of a single integrated centre for teacher education may not be necessary in the case of Mary Immaculate College and University of Limerick.

Both have since developed strong links and have started offering joint degrees in some areas.

On the issue of reduced numbers of applications for teacher education courses, the report notes that a decision to extend the Hdip into a two-year professional masters of education (PME) has had a significant impact.

It notes that additional resources were not made available to universities at the time, which led to many reducing their intake by up to 50 per cent for capacity and quality reasons.

While there were about 1,200 graduates a year from State-funded Hdips, this fell to about 800 under the new PME.

The report notes that there are significant financial barriers facing students, who face paying up to €12,000 for the two-year qualification. This often follows a four-year undergraduate degree.

This means, in some cases, it can take as long and cost more to become a teacher than to become a doctor.