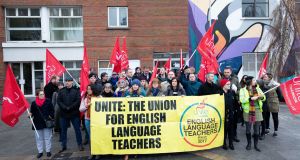 Teachers, staff and students from the Grafton College English-language school rallied for a second afternoon on Tuesday, following the overnight occupation of the college in south Dublin after its sudden closure.

The occupation, which began on Monday evening following a rally outside the Portobello school, was cut short “in the interests of safety” after representatives of the school’s owner arrived.

William John O’Brien, who has taught at the school for more than a year, was one of a group of 20 staff members who occupied the building after learning they would not receive their wages for November.

Mr O’Brien said the staff were visited by gardaí at about 9pm who were “just checking in” and had “no interest in disturbing the situation”.

As the night progressed some staff members returned home to their families and by midnight there were nine people left in the building. According to Mr O’Brien, two people representing the owner entered the building at 12.30am to “change the locks”.

“They told us they had no problem with us staying but they were quite dismissive and aggressive,” Mr O’Brien told The Irish Times. Soon after gardaí returned to the building saying they had received a formal complaint and that the staff would have to leave.

“We had decided at the beginning that there would be no resistance and if the guards asked us to leave we would for the safety of everyone,” Mr O’Brien said. Trade union Unite confirmed that the teachers decided to leave “in the interests of safety” and their departure “followed the arrival of representatives of the owner Saeed Rehman and a request to leave the premises”.

Asked for a response to the situation, a Garda spokesman said he would not comment on named individuals or organisations.

The Marketing English in Ireland (MEI) umbrella group for English-language schools is currently making arrangements to accommodate the 470 students affected by the school’s closure at other private language schools in the city.

Students say they paid fees of more than €2,000 for courses at Grafton College.

Minister for Justice Charlie Flanagan reportedly told the Dáil on Tuesday that he would urge students affected by the school’s closure to contact his department and the Department of Education to discuss a transfer of money or refund of fees. The Minister did not respond to a request for comment on the staff members left unpaid in the lead-up to Christmas.

The school’s academic manager, Ian Brangan, said the focus was now on finding work for the teachers. He said he was totally surprised by the school’s closure, particularly because he was hired last year to help grow and develop the institution.

“He [Mr Rehman] was putting a lot of money into the school; we were meant to move into a new building in February. The rent on our building had been paid up until the end of January. The signs weren’t there, only that he was an absentee owner.”

‘Not a penny left’

Mr Rehman told The Irish Times he “hasn’t a penny left” to pay the money owed to his former staff, after the school ceased trading with immediate effect.

Mr Rehman, who is based in London and has owned the college for 15 years, said the college had been losing money “in a very big way and we were not able to meet the day-to-day needs”. He said that he had injected €417,000 of his personal funds into running the company.

Mr Rehman said he had been working through financial issues “for a while” and made “every possible effort” to prevent the college’s collapse. “I actually worked until the last moment on Friday evening; I was struggling,” he said.

He said he had no access to any other assets that could be used to pay staff.

The international English-language teaching market is worth an estimated €762 million to the Irish economy, according to the Department of Education.

However, there have been a number of cases of language schools closing down suddenly in recent years, and the Qualifications and Quality Assurance Bill, drawn up to regulate the sector, is currently before the Oireachtas.

Unite has called for the Bill to be fast-tracked through the Oireachtas and amended to include “minimum standards of employment” for teachers.

Robert Dunlop, a teacher from the school who married his partner Gisela in Dublin on Saturday, said staff will continue pressurising Government officials until the Bill is passed. “It’s still not hitting home, I’m holding on to the hope that the pressure will work. But we’re all screwed for Christmas.”