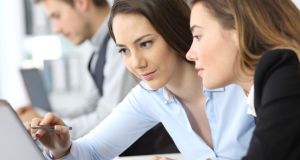 The only explanation for schools who consistently seem to perform at over the 100 per cent participation rate in CAO college courses is that some of their students are being counted twice. Photograph: iStock

There are 131 schools in Ireland where the number of students who sat the Leaving Cert in 2018 is 85 per cent, or less, of the number who took the exam in 2017.

In these schools, and many others with a significant reduction in Leaving Cert numbers since last year, the fact the progression rate of former students to third-level is measured in these lists as a percentage of the 2018 class results is an inflated progression figure.

Measured as a percentage of the class of 2018, Coláiste Pobal Osraí in Kilkenny appears to send 120 per cent of its students (including past pupils) to college, and the percentage progression for Blackrock College appears to be 112 per cent.

Up to 25 per cent of those from any school who go to college in any given year come from Leaving Cert classes from previous years. These students have taken post-Leaving Cert programmes or delayed going to college for a year or more or dropped out of another course and are starting again.

So, we estimate that for a school where the numbers taking the Leaving Cert remain relatively constant, we can deduct 25 per cent from their published progression rate to calculate the true progression rate of the 2018 class.

But in looking at schools with high college progression (as a percentage of the class of 2018) we can’t ignore the fact that 131 of these schools have had a reduction of 15 per cent or more in their Leaving Cert class size in the past year.

It’s a statistical aberration – they have seemingly high college progression precisely because their Leaving Cert student numbers are declining. To include such schools would create a false impression and distort the figures, particularly when we tabulate the “most improved schools”.

For that reason, we have excluded from all the smaller tables (for example, geographic and gender analysis, top feeders, high-points courses) schools where the number of students who sat the Leaving Cert in 2018 was 85 per cent or less than the number who sat it in 2017.

There are other schools that seem to show an improvement in progression rates, even though they had fewer students sitting the Leaving Cert in 2018 than in 2017, but whose reduction in student numbers is less than 15 per cent.

This may lead to a perceived improvement in progression rates, because of the effect of previous years’ past pupils now starting college on this year’s progression percentage, but we have left them in our most improved progression charts.

If a student drops out of one course having been counted and credited back to his/her school and starts a new programme in another course in that college or another college altogether, they are again credited back to their original school.

The reality of this phenomenon will remain hidden within the progression numbers if the total number of students progressing to college from any school over a period of years remains significantly below the total number who took the Leaving Cert during that time.