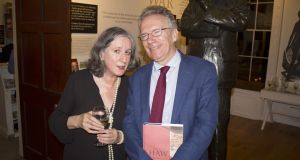 Fintan O’Toole and Catriona Crowe at the launch of the book and exhibition Judging Shaw, in the Little Museum of Dublin. Photograph: David Meaney/The Little Museum

Ireland has an ambivalent relationship with George Bernard Shaw, according to Irish Times colummist and Literary Editor Fintan O’Toole.

O’Toole was speaking at the launch of his book, Judging Shaw in the Little Museum of Dublin on Tuesday night.

Shaw won a Nobel Prize for literature and an Oscar for the screenplay for Pygmalion in 1938.

O’Toole said that as well as being a prolific writer, Shaw was one of the first global celebrities who carefully created and managed his brand.

“He is by far the most famous famous Irish person to have ever lived. There was not other Irish person who had the kind of global reach,” said O’Toole.

“Why does Ireland have such an ambivalent relationship with someone who has such force in the world?” he asked.

“He was outrageous. He questioned things, he used his brilliant ability to promote himself - this GBS character to allow him to say things that were un-sayable,” he said.

O’Toole said Shaw’s interest in social justice, poverty and human rights means he was a man with much to say to our times.

“We have the kind of misogyny now that Shaw had done so much to banish back in our public culture. It would be nice to think of Shaw as a figure from another age who is no longer of any importance to us. The sad fact is that much of the stupidity he helped to banish is back,” he said.

Shaw Day will take place on the anniversary of his death on November 2nd.