Students in Lucan Community College are voting for the first time in the general election on February 8th. Video: Enda O'Dowd 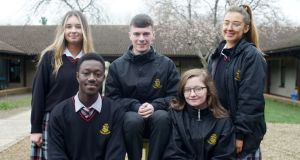 She is one of dozens at her school and about a quarter of a million young people nationally who will have their first chance to cast their ballot in a general election.

Young people are set to be a crucial demographic in determining the shape of the next government.

But what makes them tick? What political parties do they gravitate towards? And, more crucially, will they turn up to cast their ballot in the first place?

Among the first-time voters at Lucan Community College, a 900-pupil secondary school in west Dublin, the students are interested, engaged and hopeful for the future.

This screen-age generation is, in many ways, better informed and more politically engaged than others before them.

Civics and political education are now part of the curriculum. School demonstrations over climate change and social issues such as the same-sex marriage and abortion referendums have made politics feel relevant for them.

But they are also deeply sceptical of the promises of political parties and express doubt that the next government will be able to deliver meaningful change.

The first surprise is that climate change isn’t necessarily top of the agenda for these 18 year olds.

They cite local issues such as the scourge of drugs, poor public transport, the rental crisis and runaway cost of living as among the most important issues for them – as well as protecting the environment.

“Public transport is a big issue,” says Lia Stokes (18). “Where I live, and for the college I’m looking to go to, it would be two buses and over an hour and a half journey to and from college.”

“Drugs is a big issue – especially with young people,” adds Sheik Bah, who wants to study dance in the UK when he finishes school.

“You see young people either selling it or using it and it’s sad to see. To be honest, it’s a big problem. It’s quite shameful the way the people giving out drugs are moving in society as if there are no repercussions for their actions.”

The housing crisis also feels very real for them. The prospect of being able to afford to leave home seems very distant, while homelessness is all too visible on the streets.

“The number of homeless people keeps increasing . . . in the city it’s very prevalent and it’s sad to see,” says Seán Egan, who’d like to go to college, but hasn’t made up his mind what to study yet.

“How they let rents rise that high . . .” says Lucy Rhodes, who’d like to become a social worker. “When I grow up, I know I won’t be able to afford a house here unless I move abroad.”

For all the social problems they want to see addressed, they are, by and large, happy with growing up and living here.

Most say they appreciate the good standard of education they have received and are hopeful they will get good jobs.

“In Ireland, there are a lot of job opportunities, facilities for people to grow up well and colleges to study in,” says Megan Miclea.

“I think it is a good place to grow up in,” says Seán Egan. “It’s a democracy, so we’ve freedom to do what we want, to an extent, though there is a lot of hardship with children living in poverty and homelessness.”

He sees immigration as a good thing which has helped enrich Irish culture.

“We have our own culture, such as the GAA and music . . . and lots of other people are bringing their culture in and mixing it in. It makes for a diverse society.”

As for what way they will vote on election day, most are still making up their minds. Left-of-centre parties such as Sinn Féin, the Social Democrats and the Green Party get the most mentions.

But if there is one thing which unites them, it’s the lack of any support for either Fine Gael or Fianna Fáil.

“Fianna Fáil and Fine Gael – they need to get out of government,” says Lucy Rhodes. “Sinn Féin has never been in government to show what they can do.”

Even though the Lucan constituency of Dublin Mid-West is a short distance from Leo Varadkar’s Dublin West constituency, there is little sign of support for him.

“Personally I wouldn’t like to see Leo Varadkar in charge,” says Lia Stokes. “From what I’ve heard about all the stuff he’s done, I know many people aren’t a huge fan. He doesn’t seem like the nicest man either.”

“Micheál Martin would be a bit more appealing, but I only turned 18 a few months ago so am still looking into the parties.”

By and large, most see their long-term future here.

Some hope to stay abroad or work outside Ireland – but all say they would like to settle here permanently.

“I want to study dance, so I hope to go to the UK for a couple of years . . . and work there for some time and maybe somewhere else in the world . . . but I would definitely come back to Ireland,” says Sheik Bah.

“The people are the best things. It’s a very safe country compared to many other places. Nature – nature is amazing and culture as well: Irish music and even the languages.”

“Yes, I do see my future here,” says Megan Miclea. “I’d definitely like to stay here and work here and study here.”

There is also anticipation at being able to cast their vote in the election. “I want to be able to make a change – and it will be nice to have a say in how the country will go over the next four or five years.”

On the day: Will young people turn out to vote?

In politics, there’s a long-standing belief that young people don’t turn out to vote.

The figures tell another story. Turnout among the 18-25 age group has been rising over the past decade or so. And in recent polls, such as the abortion and same-sex marriage referendums, young people played a significant role in shaping the final outcome.

The fact that the election is to be held on a Saturday for the first time in a century has been welcomed by youth groups, who expect a spike in younger voters.

The National Youth Council of Ireland says many young people who are studying at university, training or doing an apprenticeship in another part of the country are more likely to be back home.

One effect of this could be a bigger vote for parties who tap intoissues which are most popular among younger groups, such as climate action.

The Union of Students in Ireland, which has helped sign up about 2,000 students to vote in recent weeks, has also welcomed the move to a Saturday vote.

However, USI president Lorna Fitzpatrick notes many are doing part-time jobs to pay for college and may not be registered to vote where they work.