FF pledges to expand Educate Together schools amid restrictions 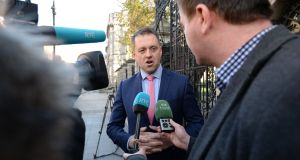 Fianna Fáil has pledged to expand enrolment to multi-denominational schools which have been controversially instructed to restrict their student intake to half a class each year.

The Irish Times reported earlier this month that several schools which opened under the Government’s process to divest patronage of Catholic schools were being forced to turn away large numbers of junior infants because of limits to their pupil-intake.

Educate Together, the patron body for the schools, said a new policy had been put in place to ensure divested schools did not adversely affect existing primary schools in the area.

It has objected to recent correspondence from the Department of Education which directed these schools to adhere strictly to a half-stream intake of 13 junior infants for the 2018/19 school year.

It said these instructions were recently received from the department by Educate Together schools in Tramore, Co Waterford; New Ross, Co Wexford; and Trim, Co Meath. Similar information was communicated to its schools in Tuam, Co Galway and Castlebar, Co Mayo.

The Department of Education, however, has rejected claims that there is a new policy in place and said it was made clear from the outset that half-stream classes only had been authorised.

This was because these schools were set up in areas of stable population growth, on foot of the recommendations of the Forum on Patronage and Pluralism.

Fianna Fáil’s education spokesman Thomas Byrne, however, said the party would would establish these schools on at least a full-stream basis if in government.

“We demand that the Government, now that these schools are established, allow these schools to operate to the full potential of the parental and family demand for them,” he said.

“ This would allow the schools to operate as a normal school and satisfy the reasonable demands of parents and families.”

Ronan Moore, the parent of a two-year-old child who was pre-enrolled in the Trim Educate Together school, said the restrictions were “incredibly disappointing”.

“In Trim we have five excellent primary schools but four of these are denominational and only one, the Educate Together, is multi-denominational,”said Mr Moore, who is a Social Democrats councillor.

“That school has now reduced its intake for 2018-2019 to 13. It is incredibly disappointing for parents who had expected that there would be 26 school places for the new term. In terms of choice, it’s just not good enough, especially as Trim has a growing population.”

A department spokeswoman said surveys of parental demand at the time the schools were being established indicated a long-term projected size of up to half a single-stream school was required.

“This is clearly outlined in the reports on the surveys regarding parental preferences on primary school patronage published by the Department in December 2012 and April 2013. Based on the current pupil teacher ratio of 26:1, half a single stream equates to a junior infant intake of 13 pupils,” she said.

In the case of any school applying to expand its intake, the department examines school size in order to preserve a balance among all schools in an area and to ensure that one school is not expanding at the expense of another.

“While the situation may result in some pupils not obtaining a place in the school of their first choice, the department’s main responsibility is to ensure that the existing schools in the area can, between them, cater for the demand in that area,” she said.

The department’s priority in the allocation of scarce capital funding has to be in providing sufficient school places in areas of demographic growth, she added.

Educate Together, however, says it agreed to open these schools on the basis of their long-term viability as full-stream developing schools.

“The department is now retrospectively seeking to change the basis upon which Educate Together agreed to proceed on, and to impose a restriction that violates the lawful preference of a significant numbers families in these areas.”