Trinity College Dublin to offer degrees in conjunction with US university

Partnership with Columbia University will see students receive degree from both 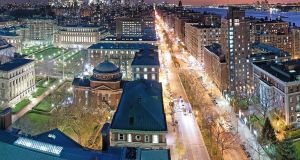 Columbia University in New York, which is partnering with Trinity College Dublin to offer dual degrees in the arts and humanities

Trinity College Dublin is to offer degrees for the first time in conjunction with Columbia University in New York in the arts and humanities.

It is the first international partnership of its kind for Trinity, where students will spend two-year periods in both universities and receive degrees from both institutions.

While it is aimed primarily at international students, it will also be open to Irish students.

Irish students would pay regular student contributions for the duration of study in Ireland (up to €3,000 a year), and US fees while in Columbia (about $50,000 a year).

Financial support is available from Columbia for students on a case-by-case basis, a Trinity spokeswoman added.

The class of 2018 will start in Trinity this September with about 40 students across various programmes.

Applications are closed for 2018, while applications for 2019 will open this summer.

Students will pursue an undergraduate education in the areas of the arts and humanities, spanning the two continents, according to the universities.

They will spend their first two years at Trinity, studying one of four areas: English studies, European studies, history, or Middle Eastern and European languages and cultures.

They will then go on to study at Columbia for their second two-year period, completing a core curriculum and several majors.

Trinity said the programme has proved extremely popular with prospective students, with a high number of applications received from more than 20 countries worldwide including Ireland, the US, UK, India, Brazil, Canada and China among others.

It builds on two other dual degrees that Columbia University already has with Paris Institute of Political Sciences (Sciences Po) and City University of Hong Kong.

Dr Prendergast said it was a “historic day” to partner one of America’s leading universities.

“Trinity has produced some of the world’s great minds across the arts and humanities, including the Nobel laureate Samuel Beckett, and more recently the Booker Prize winner Anne Enright,” he said.

“Similarly, the arts and humanities are pillars of Columbia University’s stellar reputation, bringing the world’s best art and ideas to our attention. Together, both institutions will draw on both the traditional and innovative, encouraging students to challenge themselves and develop an understanding of an increasingly globalised world.

“These dual BA programmes offer a truly international educational experience for our students.”