The move is under consideration to prioritise Irish speakers in Gaelscoileanna 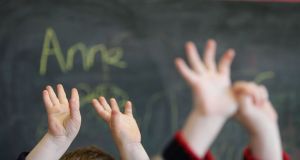 Minister for Education Richard Bruton said he wished ‘to promote the Irish language and Irish-medium schools as far as possible’. Photograph: Getty Images

Four-year-old children could face interviews to test their ability to speak Irish under new measures to prioritise admission for children from Irish-speaking families to Gaelscoileanna.

The move is being considered in an amendment to new school admissions legislation which is due to go before the Oireachtas shortly, according to sources.

The School Admissions Bill, as currently drafted, seeks to ensure fair access to schools by prohibiting mandatory interviews and testing of parents as conditions for admission to schools.

However, the established practice of many Gaelscoileanna has been to prioritise access for children from Irish-speaking families through interviews with their parents.

An amendment which is being drafted is understood to allow for children to be interviewed to help determine their standard of Irish.

A spokesman for the Department of Education confirmed an amendment is being drafted, but declined to comment further.

He said Minister for Education Richard Bruton had been reflecting on how best to allow children from an Irish-speaking background gain access to Irish-medium schools in a fair, inclusive and transparent manner.

“The Minister is supportive of and wishes to promote the Irish language and Irish-medium schools as far as possible,” he said.

Officials from the Department of Education have been engaging with the Office of the Attorney General in relation to how best to consider Irish language speakers gaining access to their local Irish-medium school.

“The engagement on the proposals has been positive and the drafting of amendments is nearing conclusion. It is important that the amendments which the Minister introduces are workable and legally sound,” the spokesman added.

Any exemptions may be seized on by critics who claim Gaelscoileanna use soft barriers such as Irish-language admission rules which end up excluding foreign nationals or minority groups.

However, Cearta Oideachais, which represents Irish-speaking families, argues Gaelscoileanna should be able to continue to give priority to Irish-speaking pupils in order to protect the educational rights of this small minority of children.

The group said children who are being raised through their native tongue represent less than 5 per cent of pupils in Irish-medium primary schools outside the Gaeltacht.

“Unlike members of the Church of Ireland or the Catholic Church seeking to establish their right to priority enrolment in a faith based school, children raised through Irish do not have the equivalent of a baptism certificate to prove that they are native speakers,” it stated in a submission on the bill.

“Our primary concern is the right of our children – members of Ireland’s indigenous linguistic minority and native speakers of the first national language – to receive an education in their first language, and to achieve full working literacy and competency in that language.”

The group said children who have Irish as a first language “scaffold” other children’s language learning in the classroom.

“In Irish-medium schools, they are therefore an important resource for peers for whom Irish is not the language of the home,” it stated.