Children turned away from Educate Together schools due to ‘restrictions’ 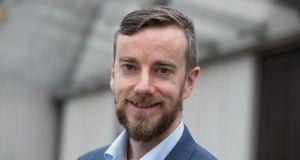 Ronan Moore, parent of a two-year-old child who was pre-enrolled in the Trim Educate Together school, said intake restrictions were “incredibly disappointing”. Photograph: Paul Sharp

Multi-denominational schools which opened under the Government’s process to divest patronage of Catholic schools say they are being forced to turn away large numbers of junior infants because of what they say are new restrictions on their pupil-intake.

Educate Together, the patron body for a number of multi-denominational schools affected, claims a new policy has been put in place to ensure divested schools do not adversely affect existing primary schools in the area.

It has raised concerns with the Department of Education over recent correspondence which directs these schools to adhere strictly to a half-stream intake of 13 junior infants for the 2018/19 school year.

It said these instructions were recently received from the department by Educate Together schools in Tramore, Co Waterford; New Ross, Co Wexford; and Trim, Co Meath. Similar information was communicated to its schools in Tuam, Co Galway and Castlebar, Co Mayo, last year, it added.

“These schools are now effectively being told to turn away large numbers of families who will not now be able to access the equality-based education they had hoped for their children,” Educate Together said in a statement.

Ronan Moore, a parent of a two-year-old child who was pre-enrolled in the Trim Educate Together school, said the restrictions were “incredibly disappointing”.

“In Trim we have five excellent primary schools but four of these are denominational and only one, the Educate Together, is multi-denominational,’ said Mr Moore, who is a Social Democrats councillor.

He said many children who had applied to start in junior infants this year will be turned away and has set up a petition to expand the school’s intake .

“That school has now reduced its intake for 2018-2019 to 13. It is incredibly disappointing for parents who had expected that there would be 26 school places for the new term. In terms of choice, it’s just not good enough, especially as Trim has a growing population,” Mr Moore said.

The Department of Education, however, has rejected claims that there is a new policy in place and said it was made clear from the outset that half-stream classes only had only been authorised.

This was because these schools were set up in areas of stable population growth, on foot of the recommendations of the Forum on Patronage and Pluralism.

A department spokeswoman said surveys of parental demand at the time indicated a long-term projected size of up to half a single stream school was required.

“This is clearly outlined in the reports on the surveys regarding parental preferences on primary school patronage published by the Department in December 2012 and April 2013. Based on the current pupil teacher ratio of 26:1, half a single stream equates to a junior infant intake of 13 pupils,” she said.

In the case of any school applying to expand its intake, the department examines school size in order to preserve a balance among all schools in an area and to ensure that one school is not expanding at the expense of another.

“While the situation may result in some pupils not obtaining a place in the school of their first choice, the department’s main responsibility is to ensure that the existing schools in the area can, between them, cater for the demand in that area,” she said.

The department’s priority in the allocation of scarce capital funding has to be in providing sufficient school places in areas of demographic growth, she added.

However, Educate Together said it agreed to open these schools on the basis of their long-term viability as full-stream developing schools.

“All five of these Educate Together schools have gone from strength to strength over the past number of years, and the majority have demonstrated pre-enrolment numbers for 2018/19 to accommodate a full stream.

“These school communities have expressed deep frustrations at the prescribed barriers to further development being applied by the department,” it said.

“The department is now retrospectively seeking to change the basis upon which Educate Together agreed to proceed on, and to impose a restriction that violates the lawful preference of a significant numbers families in these areas.”

A department spokeswoman said should a school patron wish to make a case for an increase in the school’s intake level, proposals will be reviewed in conjunction with the current demographic data, available accommodation and capacity levels of all schools in the relevant area.

“A case has been submitted to the department in respect of a number of divested schools and this is currently under consideration,” she added.