More than 5,000 15-24 year olds diagnosed with chlamydia, gonorrhea or herpes 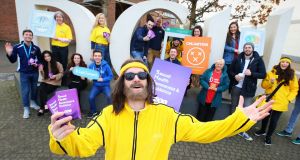 The Union of Students in Ireland has joined with the HSE to launch a sexual health awareness and guidance - dubbed the Shag campaign - in college campuses this week.

At least 5,200 people aged between 15 and 24 were diagnosed with either chlamydia, gonorrhea or genital herpes last year, representing an 11 per cent increase compared to 2016.

The Union of Students in Ireland (USI) has joined with the Health Service Executive (HSE) to launch a sexual health awareness and guidance - dubbed the Shag campaign - in college campuses this week.

Helen Deely, head of the HSE’s sexual health & crisis pregnancy programme has actively encouraged people who are sexually active to think ahead and practice safer sex.

The HSE ’s “Johnny’s Got You Covered”campaign team will be distributing condoms and lubricant to students this week at IT Carlow, Waterford IT, NUI Maynooth University and Queen’s University Belfast.

Last year both USI and the HSE distributed 40,000 condoms and lubricant packs to students as part of the campaign.

“Using a condom will help limit the risk of contracting a sexually-transmitted infection and an unplanned pregnancy,” she said,

USI President Michael Kerrigan said: “This year, we’re asking students ‘are you getting it?’ when it comes to STI (sexually transmitted infections) tests and consent.

“It’s important that every student who’s sexually active looks after their own sexual health. This means getting tested regularly, using condoms to protect you from the risk of contracting an STI.”