Lecturer accused of attempting to engage in inappropriate conduct 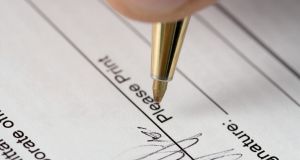 Signing the confidentiality agreement while the investigation is ongoing means they cannot discuss the allegations publicly.

The lecturer has been accused of making inappropriate comments towards the two female members of staff and of attempting to engage in inappropriate conduct with a female student on campus grounds.

UCC launched an investigation into the allegations last month and have begun interviewing witnesses and complainants.

It is understood the university has asked the complainants and potential witnesses on the staff to sign a confidentiality agreement while the investigation is ongoing, meaning they cannot discuss the allegations publicly.

Serious disciplinary action can be taken against the staff members if they break the agreement. The student has not been asked to sign the agreement.

It is understood support structures and a designated point of contact has been put in place for the three women who have made allegations. The women have made written complaints and these are to be put to the accused lecturer to allow him a chance to respond.

A spokeswoman for UCC has declined to comment on the investigation.

“Consistent with best practice, full regard is given for due process and natural justice at all times, UCC deals with all complaints in a proactive and timely manner but does not comment on individual cases,” the spokeswoman said.

She forwarded a copy of the university’s “duty of respect and right to dignity policy to deal with any complaints allegations of bullying and harassment”.

The policy details two kinds of complaint procedures; an informal process where the goal is not to establish guilt or innocence but to restore a good working relationship between staff and a formal one involving an investigation and possible disciplinary sanctions.

It is understood the investigation into the lecturer comes under the formal process.

The policy states when a formal investigation takes place into a staff member, “all aspects of the investigation, including the report and findings must be treated as confidential by all parties concerned.

“Breach of confidentiality by a party of the investigation shall be deemed to be a serious breach of this policy which may result in the invoking of disciplinary proceedings under the university’s statutes.”

If the allegations are found to be true, it will be up to UCC’s President Patrick G O’Shea, who was appointed last year, to decide what action will be taken. Potential actions include invoking disciplinary procedures or dismissal of the offending staff member.

An investigation found that while Dr Evans had no intention to offend, the incident fell within the definition of sexual harassment under university’s policy. Dr Evans was ordered to undergo counselling and two years of monitoring.

He took a High Court case against the university which found the sanctions were too harsh and that a verbal warning would have been more appropriate.