End of the line for the Leaving Cert?

The first step of reforming our exam-obsessed senior cycle gets under way today. But who gets to decide what our children will learn? 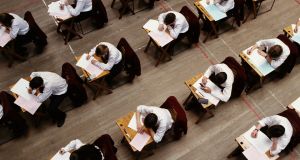 ‘The physical classroom needs to be ripped out. It’s pointless changing the message when the interface has remained the same since Dickens’ 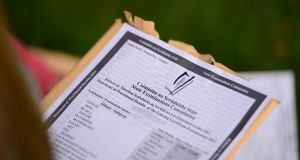 ‘Should we ease pressure on giving less time given over to exam subjects and more room to develop life skills?’ Photograph: Bryan O’Brien

Is the Leaving Cert fit for purpose for the 21st century? It’s a question being regularly asked against the backdrop of a world where the skills required for workplace are changing fast.

The must-have career attributes to future-proof today’s school-leavers, according to the World Economic Forum, include creativity, problem-solving and critical thinking.

Yet, universities and employers grumble that too many students emerge from an exam-obsessed second-level system where students are “taught to the test” and are not learning to think for themselves.

While the focus of policy-makers to date has been on reforming the junior cycle, all eyes are set to switch to how to make the Leaving Cert more relevant to the skills needed by young people in today’s world.

Today, the National Council for Curriculum and Assessment (NCCA) will host a conference, with speakers from the Organisation for Economic Co-operation and Development (OECD) and the Netherlands to discuss international developments in upper secondary education.

It is the first step in a process of review and reform that is likely to result in a much changed senior cycle over the coming years.

John Hammond, chief executive of the NCCA, says the upcoming review will offer everybody – teachers, parents, students and any interested citizen – a chance to generate a shared vision for senior cycle over the next few years.

“We’ll be embarking on a review of senior cycle with a network of 40 schools and a series of national seminars. This will place schools at the centre of discussions about the kinds of developments needed at senior cycle,” he says.

“ In consultations related to the curriculum, we place a strong emphasis on the student voice. If, for instance, we’re developing a new specification for art, we go to one of our network schools and ask students to talk to us about their experiences and views on the existing course and how they would like to see it developed in the future.”

In designing the curriculum, the NCCA wants students to develop key skills, which include communicating, being personally effective, working with others, critical and creative thinking, and information processing.

Applied maths, economics, science subjects and modern languages are among the subjects that will be up for review.

Outside individual subjects, there are broader decisions to be made about the overall shape of the curriculum: should we ease pressure on giving less time given over to exam subjects and more room to develop life skills? How can subjects be given space to breathe if the curriculum is crammed with facts?

The NCCA has an advisory role in developing curriculum in Ireland, but the ultimate decisions are political, resting with the Minister for Education of the day.

“Our model is representative – stakeholders who represent the partners in education are involved at every stage and every level of the curriculum development process,” says Hammond.

If junior cycle reform is anything to go by, it could take a long time before senior cycle changes see the light of day. Critics say it took 20 years before these changes took root in the classroom due to over-consultation and opposition from teachers’ unions.

Hammond acknowledges the length of time it has taken, but also points out that new subjects such as Computer Science have been fast-tracked into the Leaving Cert within 18 months. Consultation, he says, is key.

“Those who are positive about this approach to curriculum development will often praise its democratic nature, the way in which it can take account of the reality of what’s happening in schools and classrooms for teachers and students, as well as how it can help to gain buy-in for developments from those directly involved in education.

“Where it is criticised it is sometimes perceived to be slow in achieving fundamental change and sometimes too compromised in its outcomes.”

Senior cycle reform will also, doubtless, see calls for new subjects: meditation and mindfulness, money management and unbiased sex and relationship education are just some that have been called for over recent times.

But if the school day is already jam-packed, difficult choices will have to be made.

Clive Byrne, director of the National Association of Principals and Deputy Principals, is chair of the NCCA’s senior cycle board, will play a key role in helping to oversee changes.

He points out that subject choice in schools is currently restricted by the availability of teachers and the size of the school; if it’s too small, it won’t be able to offer a broad subject choice.

“There are too many schools at second level and there need to be more amalgamations, although school ethos can be an issue here. A school can’t offer metalwork if it doesn’t have a teacher or the facilities.

“And parents are very influenced by the impression of the quality of the teacher and their ability to deliver good exam results.

“But the single biggest obstacle to curriculum change is that the majority of parents are happy with the status quo of the Junior and Leaving Cert; the exams are regarded as brutal but fair. While they are a very efficient way of filling first year in university, they’re not necessarily giving us a perspective of a well-educated workforce.”

Byrne says we may need to look at different ways of assessing students beyond a single terminal exam, including project work and demonstration work, although he points out that this already happens in some subjects, including art and technology.

“There is always a complicated conversation between parents, teachers and students as to what to prioritise.

“My colleagues in the anti-bullying centre are developing programmes around online safety. Nobody can argue this is not needed, but if it moves onto the curriculum, does something else need to come out?”

The NCCA’s approach is increasingly to return responsibility to the school community, but there remains a national obsession with the big exams, says O’Hara.

“That said, teachers here do have autonomy in how to interpret the curriculum and this compares favourably with other countries. In most schools, they teach it creatively and, outside the grind schools, they have a full range of social, emotional and other programmes.

“Society changes and so should the curriculum, but we need to be cautious: 10 years ago, there may have been an argument to have driving on the curriculum, though is that still the case now?

“ If we need to teach sustainability, does it have to be through an exam, or can we teach it through a green schools programme? All of this requires a considered and reflective process.”

What should be on a new Leaving Cert curriculum? We asked Twitter . . .

“Programming and technology on a wider scale to how it’s implemented at the moment . . . An updated business curriculum to focus more on real entrepreneurship could also be considered.”

“More choice! Let students choose what they want from a wider variety of subjects to choose their interests and abilities. Sex education is currently mandatory in secondary schools so technically already on the curriculum; it’s just not always enforced and is hard to monitor.”

– The physical classroom needs to be ripped out. It’s pointless changing the message when the interface has remained the same since Dickens.”