Report shows, per head of population, Ireland is ahead of UK, US, Canada and Australia 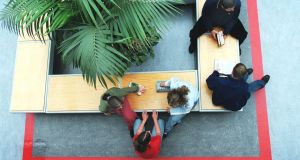 Ireland had the highest number of international English-language students in the world per head of population in 2016, according to a report by a language school representative body.

In its annual review Marketing English in Ireland (MEI), the representative association for 66 English language schools and colleges, said students from 101 countries (51 per cent of all countries) studied in the State.

One student came from each of four countries: Tonga, Bangladesh, Oman and Guatemala.

International students spent an average of 5.3 weeks learning English in Ireland, compared to 3.8 weeks in the UK, its nearest competitor, according to the report.

Based on population figures in each of the top five country destinations for English language students, Ireland came first, followed by the UK, Australia, Canada and then the US.

The number of students is not really the issue. The industry measure is the number of weeks

The 122,000 language students who learned English in Ireland in 2016 represented an increase of 11 per cent in student numbers compared to 2015. The international English language market is worth an estimated €762 million to the Irish economy according to a report by the Department of Education, International Education Strategy for Ireland 2016-2020.

Chief executive of MEI David O’Grady said the international English language sector “is a very competitive market and that is the reason MEI works with a range of State agencies, embassies and Government Departments to promote Ireland as a premier destination for international students overseas”.

MEI said it represents all but six language schools in Ireland. A spokesman said the figures are compiled by each representative organisation globally. “Every country has the exact same rules in terms of how they count them based on the number of weeks,” a student studies in that country.

“Ireland does really well in both. We’re not a short-haul for anybody. People come and tend to stay a little longer.”