Ex-UL president to hand back degree in Brian Cowen protest

The National University of Ireland conferred an honorary doctorate on the former taoiseach Brian Cowen at a ceremony in Dublin Castle. 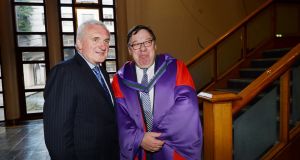 Former taoiseach Brian Cowen, who was conferred an honorary degree by the National University of Ireland, with former taoiseach Bertie Ahern after the conferring ceremony. Photograph: Alan Betson

The founding president of University of Limerick (UL) plans to hand back his honorary doctorate from the National University of Ireland (NUI) in protest over its decision to honour former taoiseach Brian Cowen.

The NUI has faced a wave of public criticism following its awarding of an honorary doctorate to Mr Cowen on Wednesday.

Edward Walsh, a controversial figure in education circles, wrote to the NUI this week to express his “amazement” at the decision and informed them of his plans to rescind an honorary doctorate he received in 1998.

“ [Bertie] Ahern and Cowen inherited an Ireland which, in 2000, had full employment, was the fifth most competitive in the world and, after Luxembourg, had the lowest debt in Europe, ” he said .

“Through their inept stewardship, they brought Ireland to its knees and caused much hardship to its citizens. In other jurisdictions, such people would find themselves held to account by society and suffer consequences.”

He added: “The NUI has inverted such norms and lowered its own standing to that of those it has so imprudently honoured.”

A spokeswoman for NUI declined to comment, beyond stating that it had been its tradition for decades to honour those who have held the office of taoiseach.

The decision to grant the award to Mr Cowen was made by the NUI’s 38-person senate, which includes senior academics as well as members nominated by the Government.

It followed a recommendation from the body’s honorary degrees committee, which is chaired by the NUI’s chancellor, Maurice Manning.

It is understood that during the same vote, members also decided to award an honorary doctorate to former taoiseach Enda Kenny. This ceremony is expected to take place later this year.

The NUI, which has received dozens of mostly critical emails and messages since the ceremony, has pointed to a citation by Prof Mary Daly which was read out at the conferring.

In it, she highlighted Mr Cowen’s achievements as well as his personal responsibility for the economic crash.