Doubts over value of €1.7bn spend on training courses 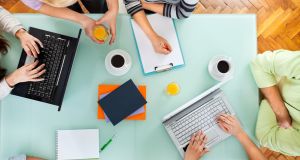 Authorities have been unable to reliably track whether individuals are progressing into higher education and employment, or ending up on the live register or unemployment

The State is “severely limited” in its ability to track the progress of thousands of students who take part in further education and training courses which cost hundreds of millions of euro a year, a Government report warns.

A spending review carried out by the Department of Public Expenditure shows the sector cost €1.7 billion last year, more than the entire higher education budget.

A significant proportion of the budget goes to helping “hard-to-reach” individuals and groups to achieve their potential, and reducing the costs to society of exclusion. The bulk, however, goes on education and training for individuals interested in a new career direction, for those wishing to access “second chance” education, as well as for school-leavers hoping to enter higher education or the jobs market.

The spending review says robust data and monitoring is needed to ensure these resources are being spent efficiently and effectively.

However, it notes there are “legacy data and systems issues . . . which severely limits the level of analysis in the [further education and training] sector, particularly for trend, outcomes and individual level analysis.”

As a result, authorities have been unable to reliably track whether individuals are progressing into higher education and employment, or ending up on the live register or unemployment.

These legacy issues are a reference to sweeping reforms which resulted in the dissolution of the State training agency Fás, along with the amalgamation of 33 vocational education committees into 16 education and training boards.

At the time, Fás was heavily criticised for wasteful expenditure and poor outcomes for some of its training courses.

The spending review notes that Solas has undertaken “critical work” in addressing data limitations, including the ongoing development of a new learner database.

This system, when fully up and running, will allow education providers to monitor outcomes for all learners.

The Government review says this is “imperative” to allow policy-makers to capitalise on improved data given the scale of investment.

A majority – 60 per cent – of the €1.7 billion invested into further education and training related to a range of employment supports such as the Community Employment Scheme provided by the Department of Social Protection to individuals taking part in training courses.*

The review points out that international evidence indicates that this investment is above the OECD average, with higher levels of funding for training and direct job creation supports.

Expenditure rose significantly during the downturn in response to rising unemployment.

However, the review says given a 55 per cent drop in joblessness, along with a return to economic growth, that it is “timely to consider the available evidence on the level and targeting of expenditure in this area”.

The report notes that while the unemployment rate peaked in 2011/2012, expenditure on further education and training continued to increase, reaching a peak in 2015.

A mid-term review of five-year strategy for the sector due to finish in 2019 should consider level of expenditure on “socially-focussed” courses – such as community employment schemes.

This should also examine how this provision corresponds with wider labour market conditions and internationally trends.

It says this review should also consider whether there needs to be a re-alignment and re-prioritisation of high level goals and actions given the improving economic and labour market situation.