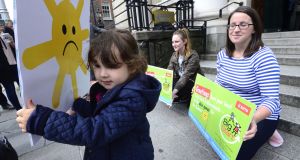 Sophia Byrne Singh from Dublin who joined childcare workers outside the Department of Finance earlier this month where postcards from the dole were delivered to Minister Paschal Donohoe to highlight the precarious contracts and lack of state investment for early years sector. Photograph: Cyril Byrne

Irish parents are saddled with some of the highest childcare costs in Europe due to a lack of public investment in the sector, an Oireachtas committee report has concluded.

It also finds the early childhood sector is among the lowest paid professions in Ireland despite the crucial role they play in supporting child development.

Among the report’s findings are that childcare workers with college degrees and master’s qualifications may earn between €10 and €13 an hour.

In many cases, this falls below the living wage - the hourly wage rate that provides a minimum acceptable standard of living - which is set by campaigners as €11.70 an hour.

The report by the Joint Committee on Children and Youth Affairs proposes the introduction of a nationally-agreed pay-scale for the early years workforce which would place terms and conditions on a par with the rest of the education system.

Sinn Féin TD Kathleen Funchion TD, the report’s rapporteur, said there has been an ongoing failure to deliver childcare and early education that works for children, families and professionals.

“This report aims to provide practical solutions to some of the employment issues facing early childcare providers,” she said.

The report notes that early childhood education and care is of huge benefit to children, but only when it is of high quality.

The professional competence of early years practitioners is one of the most important factors in determining the quality of services for young children, it notes.

Yet, the number of college graduates with childcare qualifications in the sector stands at 18 per cent, a fraction of the 60 per cent recommended in a EU report in 2011.

The report notes that State-subsidised pre-school for children aged three years or more - the Early Childhood Care and Education (ECCE) - covers just three hours of the school day and closes during the summer months.

“This creates precarious working conditions and part-time contracts resulting in most practitioners being forced to sign onto the live register for the summer months,” the report finds.

The report links a “crisis” in staff shortages to the lack of funding available to pay staff higher wages and says ambitions to have a graduate-led early years workforce cannot be fulfilled unless highly-trained staff are retained in the sector.

The report also notes there is an increasing risk of services for children under three being “squeezed out”.

It notes that for the most part there is no capitation funding provided for these children and, therefore, little incentive for financially struggling services to keep these services. Qualification requirements for staff working with under-threes are also lower.

In a statement, Minister for Children Dr Katherine Zappone welcomed the report and said it was an “an important contribution to the national debate as Ireland moves towards accessible affordable quality childcare”.

She said changing one of the most expensive childcare systems in the world into the best was not easy, but added that the Governmetn was taking the first big step, to 70,000 children receive extra supports from September.

“Our childcare goals are ambitious. They have to be as we are correcting years of under-investment by successive governments,” she said

Among the recommendations in the committee’s report include a new pay scale for the early years workforce which recognises qualifications, experience and length of service.

A reduction is worker/child ratios from 1:11 to 1:9 is recommended, which, it says, would assist in early identification of problems and pay off in the long run for the State.

It also advocates the introduction of a system to recognise and reward the skills base developed by staff working in the sector over a number of years who require formally recognised qualifications.