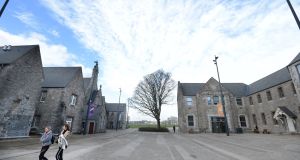 The European Union’s statistics agency has confirmed that hundreds of millions of euro in borrowings by Irish universities should remain off the Government’s balance sheet.

The decision by Eurostat is a major relief for universities and policymakers who feared the opposite decision would jeopardise expansion plans to cope with rising student numbers.

Over the past decade, Irish universities have borrowed at least €700 million from the European Investment Bank and other sources.

This has been used to modernise facilities at Trinity, UCD, DCU, University College Cork, Maynooth University and the University of Limerick.

Late last year, the Central Statistics Office (CSO) recommended to Eurostat that universities’ liabilities should not be classified on the Government’s balance sheet. However, there was still uncertainty over whether Eurostat would come to the same finding.

The CSO said on Monday that Eurostat has confirmed its classification decision last month. This means the State’s seven universities can continue to borrow funds without these sums being listed on the national accounts.

In addition, their expenditure and revenue will also remain off the State’s balance sheet.

Universities will require significant sums of money over the coming years to cope with student numbers which are forecast to rise by about 25 per cent within the next decade. For example, substantial European Investment Bank borrowings are behind the next phase of DIT’s new campus at Grangegorman.

This will bring more than 10,000 students and 600 staff together on the new campus on Dublin’s northside.

There had been concern over recent months that the degree of Government control over the sector – such as restrictions over salaries and the number of staff employed – could have led to the sector losing its autonomous status.

The Government’s decision to drop plans to allow for investigators to be appointed to examine wrongdoing by universities late last year was widely seen to have been prompted by this concern.

The Department of Education has insisted it will press ahead with these moves at a later date.

It found that legal status of the universities, along with their ability to take economic decisions and make decisions about their courses of study, meant they should continue to be classified as autonomous units.

The office also found that legislation governing pay levels along with Government-backed strategies meant the universities should be classified as under public control.

An analysis of recent financial data prompted the CSO to confirm the continued “market status” of the universities.

This is a reflection of the fact that most universities nowadays raise the bulk of their revenue privately through student charges and research activity.

The CSO’s overall conclusion was that universities should be classified as “publicly controlled market producers”.

This means that while their stock of liabilities is included in the “contingent liabilities” of Government, it is not on its balance sheet. These findings were confirmed by Eurostat.

“ The CSO will monitor the market nature of the universities annually, as is the case for all publicly controlled corporations,” the CSO said, in a statement.