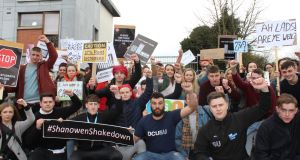 Students from Dublin City University (DCU) plan to stage an overnight “sleepout” protest on Thursday night outside privately owned student accommodation beside the college, where operators plan to raise rents by almost 30 per cent next year.

Shanowen Square, a 338-bed private student accommodation development is set to increase rents by 27 per cent to €8,695 for the next college year. Shanowen Hall, another privately run student residence on the same road, will increase rent by more than 20 per cent to €8,325. The two student housing developments are located near the main DCU campus, in Glasnevin.

On Thursday, students protested at the gates of the student accommodation, and a small number planned a sleepout protest for Thursday night.

In 2014 the rent in Shanowen Square was around €4,500 for the college year, and has nearly doubled since then, DCU student’ union president Niall Behan said. The Government need to legislate to introduce rent controls that cover student accommodation, he said.

Students’ nine month contracts run from September to May at both Shanowen developments, and the rooms are rented to foreign language students over the summer.

James Noonan is studying athletic therapy and training in DCU, and lived in Shanowen Square for the last two years. Following the rent hikes he said the accommodation will be unaffordable for him next year.

“I’m from Sligo, so commuting is not an option. I’m thinking I’m going to have to take a year out and work, just to save up enough to be able to come back” he said.

Sarah O’Dwyer, a second year communications student, rented a bed in Shanowen Square this year, but will not be able to afford the increased rates in September. “I will have to give up my degree if I can’t find alternative accommodation, because I can’t ask my parents to pay that money” she said.

Shanowen Square and Shanowen Hall did not respond to requests for comment.