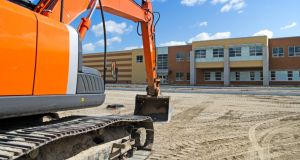 The Department of Education has been forced to put hundreds of applications for major school refurbishments on hold amid pressure to build new schools for a growing population.

Minister for Education Richard Bruton will today announce that 44 new schools will be built, mainly in the Greater Dublin Area, to meet the needs of an additional 20,000 pupils. But internal records show that some 575 applications for major refurbishments from schools have been put on hold.

With thousands of additional school places needed nationally over the coming years, the department is now building more school places than during any other period in the history of the State. There is concern, however, over the state of existing schools that are ageing and in need of refurbishment. Department records estimate that some 70 per cent of primary schools and 80 per cent of secondary schools are at least 25 years old.

A briefing note on planned capital expenditure over the next decade states: “There are in the region of 575 school applications for major refurbishments on hand which the Department has not been able to prioritise due to the current focus on additionality.”

Many of these schools say they are struggling with outdated facilities or prefabs and have had applications for facilities such as PE halls turned down.

Although plans to end the long-term use of prefabs were announced in 2015, latest figures indicate the number of rented prefabs has increased by 25 per cent between 2016 and 2017. A department spokeswoman said funding under the new 10-year National Development Plan will allow for a “significant focus on refurbishments in the second part of the decade”. In the meantime, she said, grant schemes will be available to support smaller-scale and more urgent refurbishment projects.

The department is under acute pressure to keep pace with the growing school population over the coming years. Primary enrolments are set to peak this year, while the number of young people at second level is set to reach an all-time high by 2025. This will see enrolments at postprimary level exceed 400,000 students for the first time.

Internal records also state the cost of building new schools is likely to rise significantly given that most are needed in urban areas. New schools typically cost about €6.5 million at primary level and more than €22 million for a new 1,000-pupil secondary school.

“State of the art facilities”

Mr Bruton said if Ireland wanted to be “the best in Europe, we need to make sure that we are planning for future need and providing state-of-the-art facilities for future generations”. He said the 26 new primary schools and 16 secondary schools being announced today, along with school extensions, will meet our education needs over the next four years.

In general, most new schools will be established on sites that are owned or bought by the State, while patron bodies be responsible for running them. Parents in areas where the 44 schools are due will be given a chance to register their preferred patron body through a new online system, and to express their preference of education through English or Irish.

Fianna Fáil’s education spokesman, Thomas Byrne, said that although Mr Bruton spoke about having the best education and training system in Europe, his capital budget was “increasing pressure, and he is doing little about it”. He added: “Land costs, building costs and school-age population are all up substantially. However, the increase in the capital budget for schools has not matched these rises.”